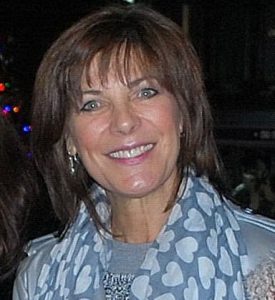 “Pam (pictured) was a great success when she opened our first festival two years ago and we are thrilled that she will be back here in December,” said churchwarden and festival team member Brenda Moore this week.

Demand for trees has led organisers to believe that this year’s festival will be even better than that in 2016 which attracted praise from visitors all over the North East and further afield.

Local businesses and organisations in Sedgefield have already taken up offers to sponsor and decorate around 40 trees ranging in size from 3ft to 6ft so that there is now space left for just a few 3ft trees at a cost of £16 each. Any local group interested should contact Brenda Moore on 01740 620758.

The festival theme this year will be ‘A Carol for Christmas’. It will be launched on Saturday, December 1st, and be open daily to visitors until Thursday, December 6th, inclusive.

During that period, special attractions will include the traditional Civic Carol Service, a concert by Ferryhill Town Band and performances at various times by several local music groups.

Profits from this year’s event will be shared between the Great North Air Ambulance and the appeal to repair the roof of the North Transept at St Edmund’s which was recently targeted by lead thieves.