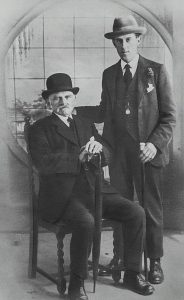 Mystery surrounds the identities of two men whose photograph has been discovered behind a dust-covered, framed picture in the bell-ringing chamber of St Edmund’s Church in Sedgefield. Church members are now keen to try and find out who they are.

“We came across the photograph when the brown backing paper on the framed watercolour print disintegrated but we don’t have any idea how long it has been gathering dust”, said churchwarden and bell-ringer Brian Mutch this week.

The photograph shows a possible father and son and was clearly taken by a professional photographer in a studio. It was tucked away behind one of two wood-framed watercolour prints found in the ringing chamber.

The photograph was hidden behind a copy of the classic ‘And when did you last see your father’ painting by William Frederick Yeames which depicts the son of a Royalist being questioned by Parliamentarians during the English Civil War.

The second print features ‘The Toast’ by Royal Academician Richard Jack.  Mr Mutch says that the two were clearly intended to be displayed as a pair.

Anyone with information about the photograph is asked to contact Mr Mutch on 01740 622302.