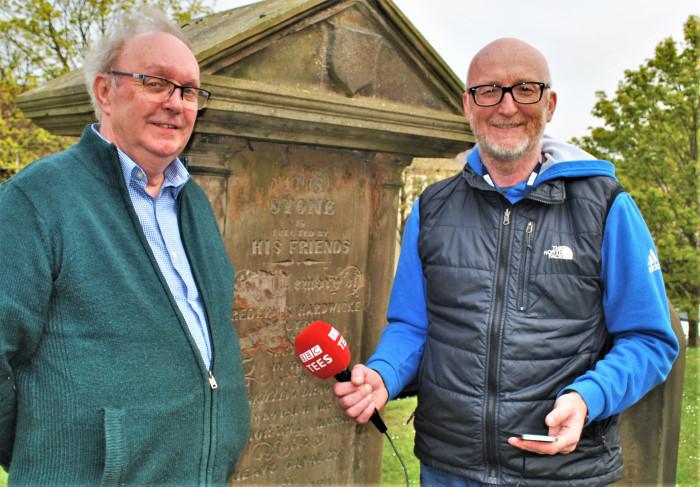 The two were examining the memorial to the young soldier who was serving with the VI Inniskilling Dragoons when he fell in the gallant charge of the Heavy Brigade at Balaklava on October 25, 1854. Frederick was 21 and is reported to be one of only 20 Dragoons killed in the battle which saw 200 Russian cavalrymen lose their lives.

Gary was at St Edmund’s to report on the new Graveyard Plan produced by Fishburn artist-graphic designer Kevan Stevens which was recently installed in the porch of the church to help visitors engaged in family-history research projects.  The original research for the Plan was undertaken some years ago by members of Sedgefield Local History Society.

Brian (pictured left) told Gary how the unusual memorial was erected by Frederick’s friends who state on the stone that he was “beloved by all who knew him”.

According to one historian, the ‘audacity, aggression and ferocity’ of The Heavy Brigade forced a hugely superior force of Russian troops to retreat – though the victory was largely obscured by the disastrous Charge of the Light Brigade later in the day.

Frederick is not the only local to have taken part in the Heavy Brigade charge. In the cemetery of the former Winterton Hospital on the outskirts of Sedgefield is the grave of John Nichol who survived the battle and died on November 3, 1893, after serving the previous 18 years as chief attendant at the then asylum.  Nichol was a bugler in the 1V Royal Irish Dragoons.