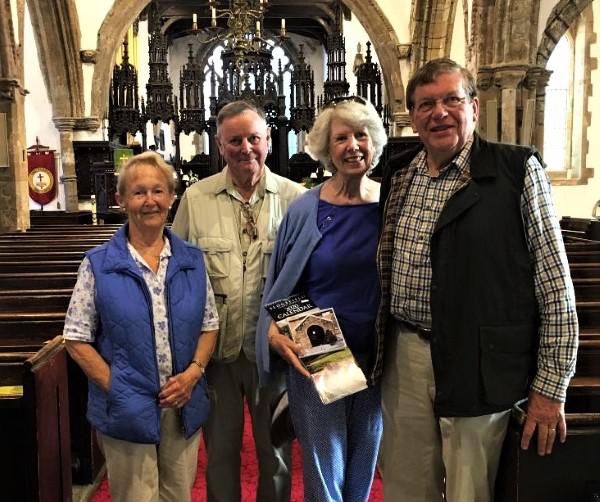 The Canadian general who oversaw the decommissioning of paramilitary weapons in Northern Ireland, General John de Chastelain, and his wife, MaryAnn, were among the visitors to St Edmund’s Church in Sedgefield at the weekend.

The general is the highly-regarded former chairman of the Independent International Commission on Decommissioning and one of the key players in the confidence-building process that led to the Good Friday Agreement in 1998. His work led to the decommissioning of Republican and Loyalist paramilitary arms.
General and Mrs de Chastelain, who now live in Ontario, made the visit to St Edmund’s with long-time friends and church stalwarts Dr. Alistair and Barbara Irvine as part of the Heritage Open Days initiative. The General and Mrs Irvine were at school together during the war years.

Later, General and Mrs de Chastelain said how pleased they were to return to St Edmund’s and to see this extraordinary and historic building again.  The General also said he welcomed the opportunity to re-visit the memorial to the members of the Royal Canadian Air Force Lancaster crew killed near Sedgefield during World War II.

The two families were among visitors from many parts of the country who spent time at the weekend exploring the nine-centuries-old history of St Edmund’s and its special architectural features.

Emeritus warden Brian Mutch, who has responsibility for church buildings in the parish of the Upper Skerne and who spent time chatting with the VIP visitors, described this year’s Open Days event as ‘probably the most successful we have ever staged’ but added: “Several people were disappointed that because of health and safety issues, we could not offer trips up the tower to see the views from the roof. We hope these will be resolved in time for next year’s event.”

Heritage Open Days are designed to celebrate England's fantastic architecture, parks, gardens and culture by offering free access to properties that may usually be closed to the public or normally charge an admission fee. The programme is managed by the National Trust.