Phil Wilson launched his re-election campaign surrounded by local supporters with the opening of his new campaign centre in Newton Aycliffe’s town centre. 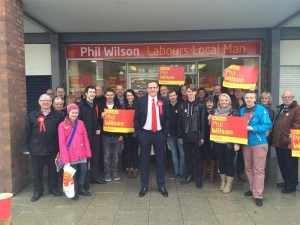 He says: “It is an honour to serve as the MP for the community in which I live. I have lived here all my life. My children went to local schools here. My father was a coal miner for many years here. My mother was born in Fishburn. My local roots run deep. I am Labour’s local man.

That is why I share the aspirations and ambitions of local people. I want to see our young people get on and go as far as they can in education or at work.

I have worked very hard for the people of Newton Aycliffe and the wider Sedgefield constituency. I led the campaign to ensure Hitachi brought their train-building factory to the area, when the Conservative-led Government wanted to abandon the plan. By working together with other partners, we were successful against the odds in securing the factory and with it hundreds of good jobs for local people.

I have worked to achieve fairer decisions on public and school transport. I have campaigned successfully to see the Town Centre redeveloped which has seen significant improvements. I am continuing to work alongside the town centre management and other partners to strengthen the retail offer. I have fought against Eon’s plan for a massive wind farm near Bradbury, Mordon and Chilton.

I have sought to be a strong voice for Sedgefield on many issues that are important to my constituency; speaking up on housing and rogue private landlords, exploitative employment practices, transport, manufacturing and the future of County Durham.

I’ve worked with schools across the constituency and I am a big supporter of the NHS, free at the point of need. I am a strong supporter of local business, the police and our armed forces. But most importantly I speak up for individuals and their families. I may not always receive the answer they want, but I will always try. That is why I run a fully staffed constituency office that has helped thousands of people.

I want to continue to serve all of the people of Sedgefield constituency as their member of Parliament and I really hope that they will vote for me either by post or at the ballot box on May 7th.

My campaign centre will be open to the public, Monday – Friday 10.30 – 3.30 pm. Either myself or someone from my campaign team will be on hand to answer questions about my campaign, about Labour’s policies, about political and local issues, and about the wider general election campaign. We have tea and coffee on hand so I really do encourage anyone to come in and have a chat and a cuppa.”

Comments may be left for the author of this page below;