A crackdown on rubbish being thrown from vehicles and dumped at the roadside is to be launched in County Durham. 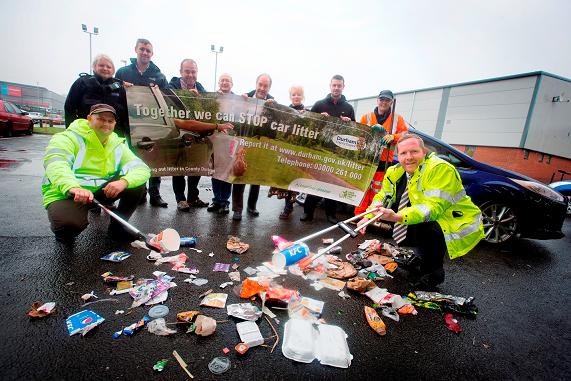 Durham County Council, working alongside various partners, is aiming to raise awareness about the consequences of failing to get rid of litter from vehicles properly. The ‘Driving Out Litter in County Durham’ campaign will take place between 12-30 October.

It will be targeted at the following six hotspots throughout the county where there will be education sessions in schools and sixth forms and businesses will be visited to highlight the issue and remind them of their responsibilities:
• Dalton Park Shopping Centre, Murton
• Renny’s Lane Industrial Estate, Gilesgate
• Genesis Way, Consett
• North Burns, Chester-le-Street
• Thinford roundabout area, near Spennymoor
• Bishop Auckland Shopping Park, Tindale Crescent

The campaign will see neighbourhood wardens carry out targeted patrols to identify and issue fixed penalty notices to anyone seen throwing rubbish out of their vehicles. It is also aimed at encouraging the public, businesses and other organisations to report anyone they spot in the act.

Primary school children will receive a visit from the council’s anti-littering mascot Tidy Ted and education packs will be handed to newly-qualified and learner drivers as well as colleges, MOT test centres and car dealerships. All driving instructors in the county will also be contacted to help further spread the message about littering from cars among learners

Oliver Sherratt, head of direct services, Durham County Council, said: “Rubbish from vehicles left at the roadside is a huge problem and there is no excuse for it.
“Not only is it hazardous to pedestrians and other road users but it carries a serious risk to staff who have to remove it from the roadside as there are vehicles travelling past them at high speeds. As a council we are faced with having to spend significant sums of money and devote large amounts of our resources to tackling the issue. This campaign is a positive way of raising awareness and helping to try and reduce the amount of vehicle rubbish being dumped by our roads in future – we live in a beautiful county and we want to keep it that way.”

The campaign was previously run in August 2013 and saw more than 1,700 people spoken to about rubbish being thrown from vehicles. Nearly 200 fixed penalty notices were handed out throughout the month-long clamp down and more than 50 advisory letters were sent to motorists about the impact of irresponsible littering.

–
Driving out litter in County Durham