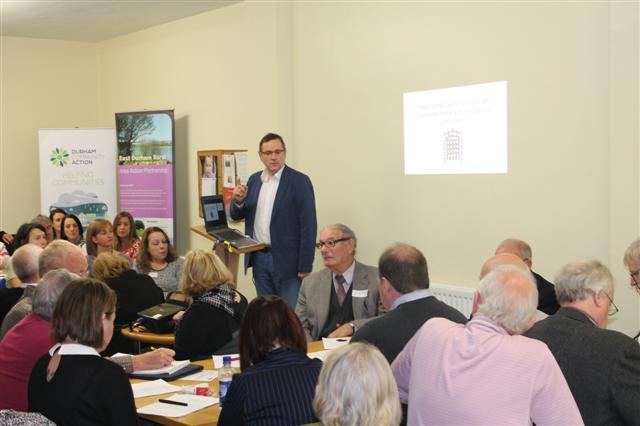 Over 60 people, groups and elected members turned up to a charity and community networking event organised by Phil Wilson MP for Sedgefield, at St Alban’s Church Hall, Trimdon on Saturday 24th October 2015.

Phil is a big champion of the charity, voluntary and community sector but has been concerned about how austerity and funding cuts are impacting the many organisations in his constituency. His office conducted a piece of research about the sector. The report was launched at the event and including findings such as 75% of groups were finding it harder to get funds now than before, that 81% knew where to get funding but 69% needed support in getting those funds. The report also highlighted a mismatch between the needs within communities both reported and statistically and the core activities of some of the charities and groups. It suggested that groups should look at more targeted work and develop better joint working and collaborations.

“The feedback from the event has been excellent” says Phil. “We wanted to bring the charities and the community together, to offer them practical support and we also make some recommendations for how the groups might develop in the future. I think we achieved all of this and more. Many people said they would like to continue to meet so we will look at how this might be possible. I am also looking into possibly developing a toolkit so other MP’s can replicate this in their own areas.”

Lindsay Johnston of Bishop Middleham Hall, said of the event “There was a really encouraging attendance, and possibly the start of community groups combining efforts and sharing knowledge and experience. The atmosphere was good and there was a tangible feeling of all the organisations and the community groups wanting to work together, that we’re all on the same side and all wanting to do the best we can.”

Barbara Gubbins, CEO of County Durham Community Foundation said of the event “It’s brilliant that Phil’s taken the initiative to do this. It’s exceeded my expectations in terms of numbers which is positive but it also highlights the need to do this kind of thing more”. She went on to say “As an organisation, at this time we need to be more in touch on the ground than we are and I’m committed to doing more of this”

Lauren Crawford, a young woman and resident of Trimdon Grange said “It was really good to network and find out what’s out there and to meet people” “I’m interested in volunteering in IT and it’s been great to work out how you can offer your services to the community”

For those that would like to find out more about the research, or sign up to future events, they are advised to visit Phil’s website www.phil4sedgefield.co.uk