A non-stop bike ride from County Durham to London has raised well over £4,000 so far for a council chairman’s charity. 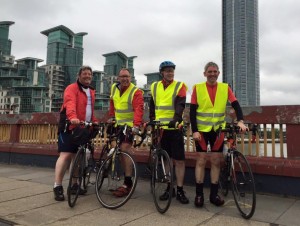 An intrepid team of five completed the 270 mile run from Trimdon to Vauxhall, non-stop in 23 hours and 28 minutes.

And so far the epic ride has raised £4,302 for the North East Autism Society (NEAS), the chosen charity of Councillor Jan Blakey, Chairman of Durham County Council.

The North East Autism Society, which is celebrating its 35th anniversary this year, provides a wide range of services and support to people and families affected by autism – a condition which affects how people process information and see the world.

There are more than half a million people in the UK living with autism and 26,000 in the North East.

It is estimated that one in every 100 people live with autism, an invisible disability which often leaves people feeling very lonely and misunderstood.

Cllr Brookes said: “I’ve supported chairmen’s charities before through my cycling, but this is the toughest challenge we have ever undertaken.

“The weather was kind and we pulled each other along, working together as a team.

“To complete the ride non-stop, within 24 hours, is a tremendous achievement, which will live long in the memory, more so than the pain in our legs!”

Cllr Blakey said: “The team did fantastically well and I am incredibly grateful that they have got my fundraising for the NEAS off to such as good start.”

The team is still accepting donations. To sponsor them, visit www.justgiving.com/TeamNEAS or text ‘donate NEAS80’ followed by your donation amount to 70070.