Minutes of the June Meeting of Trimdon Parish Council held in Trimdon Grange Community Centre on Tuesday 10 June 2014 at 7:00pm.

There was one member of the public in attendance.

20. DECLARATIONS OF INTEREST
Sheila Appleton and Denise Davison declared an interest in Agenda Item 11(b) Management of Allotment Sites.

Resolved that the above declarations be noted.

21. APOLOGIES FOR ABSENCE
Apologies for absence were received from Margaret Hughes and Julie Thompson.

Resolved that the above apologies be accepted.

22. PUBLIC PARTICIPATION
There were no questions from members of the public present at the meeting.

23. POLICING IN THE PARISH
Sergeant Alex Clarke, Durham Constabulary, attended the meeting and reported the following crime figures for the period 13 May 2014 – 10 June 2014.

It was noted that incidences of Anti Social Behaviour have increased compared to the same period for 2013.

Details of the next PACT meetings were reported. Confirmation also received that the allotment watch equipment has arrived and the Neighbourhood Policing Team will be liaising with allotment holders to carry out the marking of equipment and putting up signage.

Resolved that the above report be noted.

Sergeant Clarke was thanked for his attendance and left the meeting.

It was noted, however that the Parish Council will face increasing financial pressures as a result of the County Council’s spending, particularly on community facilities, and the Parish
Council has been active in ensuring that it has good reserves to be able to deal with these pressures.

Resolved that the Accountant’s report be noted and that the Chairman and Clerk (as the Responsible Financial Officer) be authorised to sign the Annual Return for submission to the External Auditors.

26. MINUTES OF THE ORDINARY MEETING HELD ON 13 MAY 2014
Resolved that the Minutes of the Ordinary Meeting of the Parish Council held on 13 May 2014 (previously circulated) be accepted as a true record and signed by the Chairman.

27. UPDATE ON PROGRESS OF RESOLUTIONS FROM THE LAST MEETING OF THE PARISH COUNCIL ON 13 MAY 2014

The Clerk confirmed that in respect of Item 19(b) – Grazing Land at Trimdon Colliery – a response has been received from Durham County Council that there is no indication that the tenant intends to erect any structure on the land given that the agreement is only secure for 12 months. Any structure can only be erected with the County Council’s express permission.

Resolved that the above information be noted.

28. PLANNING APPLICATIONS
There were no planning applications for consideration.

29. FINANCIAL
a) Accounts for approval
The following accounts were submitted for payment: 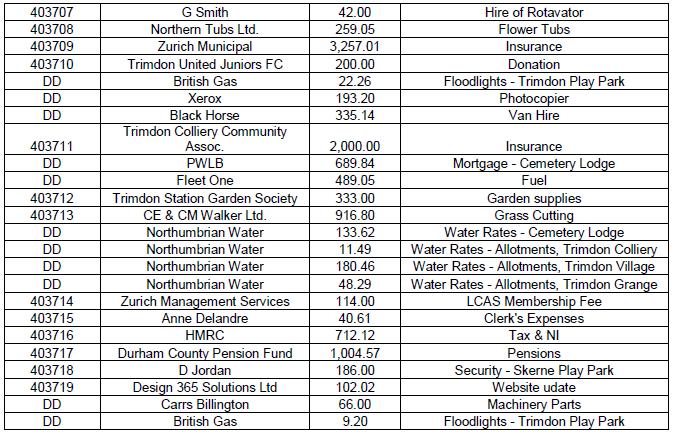 The Clerk confirmed the following amendments to the previous month’s accounts:

Resolved that the above accounts be approved.

a) Health, Safety and Welfare Policy and Risk Management

The Clerk submitted a draft Health, Safety and Welfare Policy for approval. The Policy recommended that a Health and Safety Sub-Committee be established to have direct responsibility for the general oversight of health and safety within the Council.

b) Management of Allotment Sites

The Clerk submitted a report seeking approval for a draft Allotment Tenancy Agreement and to address a number of issues at the Trimdon Village Allotment Site.

The Clerk submitted a report requesting that repairs be carried out to fencing at Elwick View, Trimdon Village to enable volunteers from the Trimdon Village Community Garden to work with residents to improve the general appearance of the area.

Resolved that the necessary repairs to the fencing at Elwick View be approved.

Resolved that the Clerk be authorised to purchase the Omega Financial Software Package from Rialtas Business Solutions Ltd., including one day training.

The Clerk advised that the Co-operative Bank is withdrawing their Business Payment Services and they have recommended that staff now receive their salary via Business Onling Banking.

The Clerk requested permission to attend the SLCC Cemetery Legal Compliance Course to be held in Harrogate on 17 July 2014.

Resolved that the Clerk be authorised to attend the above course.

g) Purchase of new IT equipment

The Clerk gave details of a quotation received from ITC Service Ltd. for the supply and installation of new IT equipment, including anti virus and hard drive back up.

Resolved that the quotation received from ITC Service Ltd. be accepted.

The aim of the Employability Fund is to increase the employability of local people who live within the council wards of Wingate and Trimdon and Thornley and specifically those living in the communities of Wingate, Wheatley Hill, Trimdon(s) and Thornley.

a) A request for funding has been received from Trimdon Banner Association towards the costs of supporting the banner at the forthcoming Miners Gala.

Resolved Trimdon Banner Association be granted a donation of £350 under the Local Government Act 1972 s.137.

b) A request has been received from Mr Ruecroft, Sedgefield to donate a commemorative seat to his parents to be erected at Trimdon Grange Cemetery.

Resolved that permission be granted to erect the commemorative seat at Trimdon Grange Cemetery.

An invitation has been received from St Mary Magdalene Church inviting the Clerk and Members of Trimdon Parish Council to the dedication of New Cemetery Gates at the East End Cemetery at 2:00pm on Friday 18 July 2014.

Resolved that the above invitation be noted.

Councillor Peter Brookes was unable to attend the meeting but forwarded the following comments:

• AGM held in May and John Robinson elected as Chairman for the year with Jan Blackey from Coxhoe as deputy.
• No changes in Cabinet positions.
• £80M to be saved over next 3 years with £19M in 2015/2014
• Locally, exploring the possibility of establishing a pedestrian accessed viewing area at the top of West Lane opposite the mast.
• Planning application for Broadway Avenue housing application going to Committee on 19 June
• A Health Hub Project for the Trimdons based at Trimdon Grange Community Centre is being explored.
33. COUNCILLOR MATTERS – FOR INFORMATION

b) Scott Hydon, Sedgefield Harriers, has secured funding for 75 children from the Trimdons to attend an athletics facility for two days during the summer school break. The Clerk is to liaise with the relevant schools to advise that Scott will be contacting them to offer places on the course.