AT A MEETING of the TRIMDON PARISH COUNCIL held in the Trimdon Community College on TUESDAY 16 APRIL 2013 at 7.00 p.m.

1.Minutes
The Minutes of the meeting held on 12 March 2013 were confirmed as correct record and signed by the Chair.

Sgt. O’Connor informed the Council that he was to retire from the Force shortly but expected that the service provided by the local Office would continue.

It was expected that she would take up her duties on Monday 8 July 2013 with a date for the retirement of the current Clerk to be agreed at a later date.

That the proposed Allotment Rules be endorsed.

The Council considered the following correspondence –

Resolved
That an objection be raised to the planning application.

The Council noted the following correspondence – 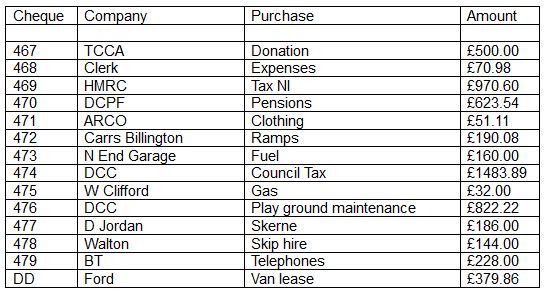 The Council noted the summary of accounts to 31 March 2013

It was agreed to seek to have the hedges cut back on Horse Close Lane.

Councillor Trippett referred to the act that 9 members of the Council were not returning following the pending elections on 2 May 2013 and moved that they be thanked them for their hard work and contributions to the Council.

Resolved
That this Council places on record its appreciate of the work and contributions made by Councillors Brookes Chapman M Davison Hovvels M Elliott Redden Terrans A Varty and C Varty.