AT A MEETING of the PARISH COUNCIL held in the Community College Trimdon on TUESDAY 12 FEBRUARY 2013 at 7.00 p.m.

1.Minutes
The Minutes of he meeting held on 16 January 2013 were confirmed as a correct record and signed by the Chair.

Resolved
That the Youth Club be awarded a grant of £250.

4.Memorial Plaque
The Council received a presentation from Mr A Luke regarding a proposal to fund raise for the provision of a plaque to mark the spot outside St Mary Magdalene Church that the then Prime Minister, Tony Blair announced the death of Diana Princess of Wales.

b) Accounts
Resolved
That the following accounts be approved for payment – 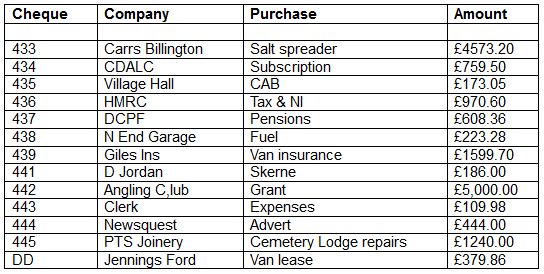 The Council noted the summary of accounts to end January 2013.