AT A MEETING of TRIMDON PARISH COUNCIL held in the Community College Trimdon on TUESDAY 11 JUNE 2013 at 7.00 p.m.

The Minutes of he meeting held on 14 May 2013 were confirmed as a correct record and signed by the Chair.

Sgt O’Conner reported that he was to retire shortly and thank the Council for their assistance over the years.

The Council recorded its appreciation of the assistance Sgt. O’Connor had given.

There were no matters which he wished to bring to the attention of the Council.

That the Council being satisfied that there is a sound system of internal controls, the Audit Return for 2012/13 be signed by the Chair and the Responsible Financial Officer and forwarded to the external auditor by the due date.

1.That no objections be raised to the planning applications b) and c) but that further information be sought on a) by the Clerk and Councillor Burton.

2.That the request by St Alban’s church be granted.

The Council was informed that DCC was having to make further budget savings of £100m.
Already staffing had been reduced by some 2000 posts through previous savings.
Some capital money had been set aside to assist with the transfer of community assets.
The 3 local county councillors were working together to make best use of the funds allocated to them but were looking to concentrate on Wheatley Hill and Thornley in the first instance in 2013/14 and would work with the Parish Councils to achieved best value.

Each Councillor had £2000 of Members Initiative Fund money which they had agreed to pool and give as grant aid with a cap of £250 for each approved application.

Councillor Trippett referred to the double taxation issue which needed to be resolved and that it was not acceptable that DCC should cut its precept in the knowledge that the Parishes would increase theirs to compensate.

With regard to future projects Councillor Brookes was reminded of the incomplete path on Horse Close Lane between Trimdon and Trimdon Colliery.

The 3 councillors had agreed to attend 2 each of the 6 parish councils in the electoral division.

Councillor Burton referred to the need for DCC to relocate its headquarters and maximise capital receipts from developing the Aykley Heads site. 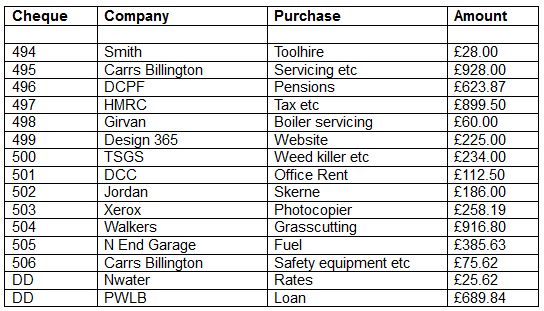 Councillor Dickinson reported a request for a skate park at Trimdon Colliery.

Given the cost of provision it was though that a better option might be to arrange transport to the facility at Coxhoe.