AT THE MEETING of the PARISH COUNCIL held in the Community College Trimdon on TUESDAY 14 MAY 2013 at 7.30 p.m.

COUNCILLOR G ELLIOTT in the Chair

The Minutes of the meeting held on 16 April 2013 were confirmed as a correct record and signed by the Chair.

Sgt. O’Connor informed the Council that he was to retire shortly and that his post would be advertised shortly.

The Council noted details of the following training events –

Code of Conduct – to be announced

Planning Framework – to be announced

Registered Village Greens and Common Land – to be announced

It was agreed that any Councillor and the Clerk could attend.

The Council was reminded that under S.27 of the Localism Act 2011 the council is obliged to adopt the Code of Conduct.

That Trimdon Parish Council adopts the Code of Conduct as ascribed by the Localism Act 2011.

5.Standing Orders of the Council

The Council noted that its Standing Orders had not been reviewed since their adoption in 2004.

It was agreed that the Clerk bring forward any changes for consideration at a future meeting of the Council.

7. Clerk’s Report – a) Accounts
Resolved
That the following accounts be approved for payment – 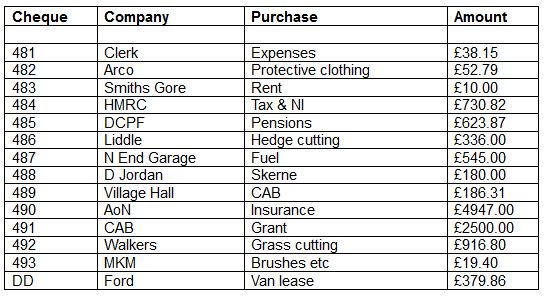