AT A MEETING of the PARISH COUNCIL held in the Community College Trimdon on TUESDAY 12 MARCH 2013 at 7.00 p.m.

1.Minutes
The Minutes of the meeting held on 12 February 2013 were confirmed as a correct record and signed by the Chair.

The Police were requested to enforce a plastic glasses rule at the Fox and Hounds on those days in the year when the travellers are in the village.

3.Environmental Appraisal
Natalie Connor from Groundwork attended the meeting and gave an update on progress with the various projects currently being undertaken.

Cemetery Gates and repairs to boundary wall in Trimdon now fully funded and a misunderstanding about the need for Secretary of State approval for the works was corrected. Groundwork agreed to have advice confirmed by DCC legal advisor on Registered Village Greens.

Outdoor gym at Trimdon Colliery – 8 to 10 pieces of equipment to be provided as well as access improvements now has the support of DCC as landlord with grants from DCC,, Awards for All, Livin and AAP applied for

Woodland Trail at Trimdon Grange – local consultation underway and funding applications to be submitted to Premier Waste and the County Durham Foundation.

DCC as land owner was aware of and supportive of the project. Possibility of using the Probation Service to provide labour for the establishment of the paths etc.

Councillor Brookes declared an interest in the projects as a DCC Councillor.

There was also the possibility of providing a sensory garden in Trimdon Grange through UDF funding.

Resolved
That the Parish Council continues to support the projects and accept future maintenance costs on completion.

4.Appointment of Clerk to the Council

Councillor Trippett on behalf of the Appointments Panel informed that Anne Delandre from Easington Village had been offered the post of Clerk to the Council by unanimous decision from a date to be agreed and subject to satisfactory references.

Resolved
That the decision of the Appointment Committee be confirmed.

5.Correspondence –a) To consider

1.That no objection be raised to the planning application.

6.Clerk’s Report – a) Cemetery Receipts
The Council noted cemetery receipts of £460 for February 2013.

b) Accounts Resolved
That the following accounts be approved for payment – 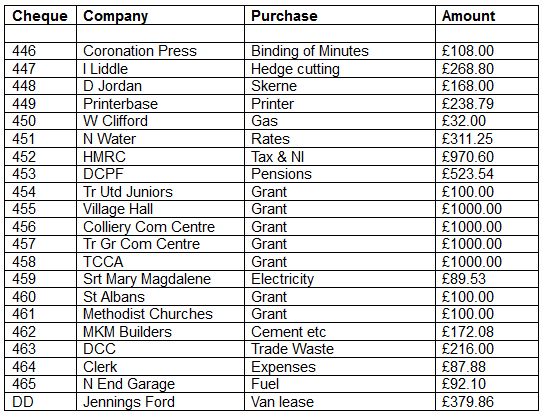 The Council received the summary of accounts to end February 2013.

The Council noted that BT had agreed to refund payments for the development of the website and cancel the agreement.

A quotation from Design 365 of Newton Aycliffe for the development of a website was considered.

Resolved
That the quotation be accepted.