St Pauls clock tower restoration:
“The Times they are a’ changing”

The ‘cry for help to restore and update the Trimdon Memorial Clock and Tower has finally resulted in the clock being restored to full working order, complete with state of the art electronic innards. 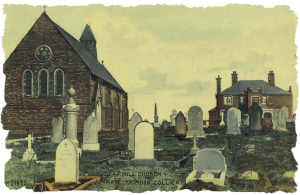 A log of those involved in raising the money needed can be found on the Fund Update page.

An example of the type of response to the photograph and editorial which appeared in The Northern Echo is the following letter.

A friend has sent me the newspaper article about a fund-raising effort to raise money for the repair of the War Memorial Clock. I have pleasure in enclosing this donation towards the fund. I hope the appeal goes well for the children and the community and the required money will be raised. I have checked the school’s website and see it is closed because of bad weather, but it occurred to me that you might post an ongoing report of how the project is going, for those of us who do not live locally but are very interested.

My connection with Trimdon is that I am the daughter of the late Mrs Anne Armstrong, Newsagent of the village. My brothers, myself and my sons all began our education at your school and all were born at the newsagents shop next to St Paul’s Church My mother served on the original committee when money was raised for its installation. (It took me a long time to get used to the clock chimes).

Good wishes to you, your staff and the pupils, and I shall look forward to seeing the newspaper report on the successful outcome.

Maureen had no idea when she wrote that letter that the Mrs Moroney mentioned in the Northern Echo article is in fact her bridesmaid with whom she had lost touch. So we hope that this project will not only raise money for the clock, but awaken lots more community spirit as well as getting people back in touch with Trimdon and long lost friends.

lan Harper (Newsagent) has got the support of his ‘paper delivery team’ to make sure that every household in Trimdon Station/Colliery will receive an information leaflet from the children of Deaf Hill Primary School, together with an envelope for donations. You will also be able to keep up on all of the information and details of monies raised via Dennis Jordan (General Dealer) or here at Trimdontimes.co.uk

We would love to hear from you about your involvement in the raising of funds to bring about the original Trimdon Memorial Clock in 1950. You can drop off your snippets at Jordan’s’ shop or send them via e-mail to Trimdon Times

Remember “The Northern Echo” wants to follow this story to its conclusion – any photographs or memorabilia you could lend us would be invaluable (they will all be returned to you).

We are offering you the chance to ‘buy some time’ – details here.

We also have a copy of the original programme from the Unveiling Ceremony to view online, plus some background information on the clock workings and the company entrusted with the restoration