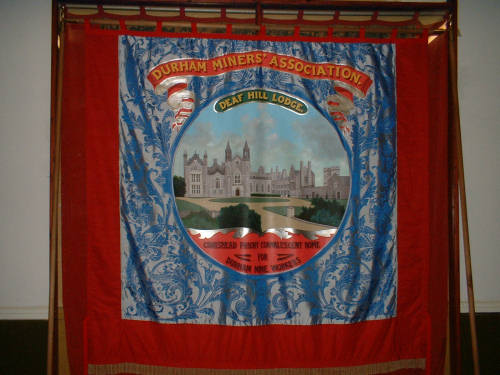 Deaf Hill Miners Banner Group would like to thank everybody who took part in the recent sponsored walk to raise money for the Banner Group funds. In particular: Dot Chaytor, Julia Brown, Betty Young, Neil and Sharron Young and Larraine Grigg.
£278.50 was raised and will go towards ensuring the Deaf Hill Banner marches at Durham again in 2008. Thank you again for your continuing support and we will keep everyone informed about future events.

The Replica Banner was delivered on Friday 15 June and is even better than we expected!
It will be paraded round the village on 11th July, starting at 6.45pm at the Crescent at Deaf Hill, going past the pit and up to the Aged Miners Homes at Tobin Street, then down Station Road, up past Harper’s corner, round Laurel Crescent, back up Rodwell Street and back to St Paul’s church where the Rev Michael Gobbett will bless the banner.
Then its back to the Community Centre where the bar will be open!

The Rev. Cobbett will bless the new banner on the 11th July at approximately 7.30pm in St. Paul’s Church.
This will be after the march through the village which will start at the Top Shop, past the old pit and up to the Aged Miner homes, returning down Station Road back to the church for the blessing. The march will be accompanied by Trimdon Brass band

After the blessing, it’s back to the Welfare Hall where the bar will be open.
We are also privileged to have our banner blessed in Durham Cathedral on Durham Big Meeting day, 14th July. Information will be in the local press.
More information about the new Community Banner at a later date.

DO YOU HAVE ANY PHOTOS OR MEMORIES of TRIMDON STATION, TRIMDON COLLIERY or DEAF HILL?

Deaf Hill Miners Banner Group is holding an open day at the Community Centre (Miners Welfare) on Saturday 5 May 2007 from 10:30am to 4pm. Come along and meet artists Helen Ward and Jane Crawford. Bring your photos and memories or just come and chat about the village you live in. All contributions will be considered for inclusion on the Community Banner.

The new banner will be blessed in St. Paul’s church on 1st July. It will also be paraded around the village accompanied by Trimdon Brass Band (times & dates to be advised later)

Deaf Hill Miners Banner Group is holding a function on 28 February 2007 at the Community Centre, Station Road, (old Miners Welfare). It is to celebrate securing Heritage Lottery funding for a replica lodge banner and new community banner to be paraded at the Durham Miners Gala in July 2007.
There will be performances by the Trimdon Concert Brass Band and folk group Skerne plus bar and raffle. Entrance by ticket only priced at £3 on sale at Jordan’s emporium, Trimdon Colliery Club and the Community Centre. But hurry! They’re going fast!

As of the last meeting, it was hoped the Deaf Hill banner will be completed some time in July.
We will also be starting on a community banner for the younger generation to carry.

The Deaf Hill banner group are pleased to let you know that we have been successful with our application for a lottery grant amounting to £15,800.
This, along with the money we have made by holding functions etc, at our Welfare Hall, means we are able to go ahead with our project and have our banner presented with the brass band at the Miners Gala at Durham Cathedral,
We as a village are being recognised again through the help of our volunteers and public support.

Lets keep it going, I wish to thank everyone involved.

A big thank you to everyone who supported the Deaf Hill Banner Group launch at the Community Centre.

It was a fantastic event with the fun of the marvellous Bert Draycott, the brilliant Trimdon Concert Brass and the real stars, the girls of the youth Group.
The night was a perfect mix of laughter and emotion with the high point of the reading of the names of the men who lost their lives at Deaf Hill while the band played ‘Gresford’ the miners’ hymn.
Mike Amos’s write up in the Echo of 3 August was one of the best I’ve read. Truly memorable!! thanks again! 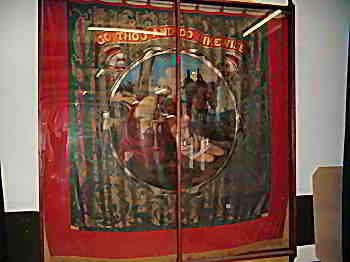 Deaf Hill Miners Banner Group
is a community group which has been formed to raise funds for a replica of the banner, currently in the Community Centre, to be marched into the 2007 Durham Big Meeting, and for a community banner to represent the whole community of Trimdon Colliery and Deaf Hill.
We are holding a launch night on 26th July at the Community Centre (old miner’s Welfare).

The evening is ‘Banners and Brass’ , a Durham Big Meeting themed night, hosted by Bert Draycott (former World Spoons Champion, former deputy, entertainer, artist….a reet clever dick if ever there was one!!!) and featuring the renowned Trimdon Concert Band.

The Community Centre youth group will be performing short sketches and are looking for flat caps, waistcoats and scarves for the performance. Any offers, please contact Debbie at the Community Centre on 882200 Wednesday July 26th 2006 from 7.00 pm to 11.00 pm. Bar available, pie and peas.
Entry by ticket only.