Trimdon, Past ,Present and Future
with The Joint Trimdon Regeneration Partnership
In conjunction with Trimdon 2000 and Trimdon Digital Community 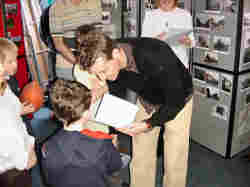 Colin CooperOn Friday 31st March 2006 a Community Event was held at Trimdon Grange Community Centre.
Football star Colin Cooper, who was introduced by Cllr.Lucy Hovvels member of the Joint Trimdon Regeneration Partnership, opened the Proceedings. He presented prizes to the winners of the poetry, picture and logo competitions, and stayed to sign autographs and give tips to the prospective football stars of the future who delighted everyone with a display of their soccer skills.

The sun shone and the people came in their hundreds to enjoy the various stalls and demonstrations on offer. Many of the local groups who work in Trimdon were represented at the Event. The crowds were able to appreciate some of the opportunities available in the community. Many groups brought exhibits to demonstrate the talent existing within the people of Trimdon.  From blowing a trombone with young members of the Brass Band to the more delicate art form of lace making, there was something for everyone.

The Present was represented by the attendance of the many local groups (see list) and examples of the Partnership successes.
Members of the Partnership were available to discuss their role. The Joint Trimdon Regeneration Partnership is comprised of representatives from Trimdon Colliery, Grange and Village. The Group would welcome new Members. Please Contact Trimdon House Tel. No 01429 883063 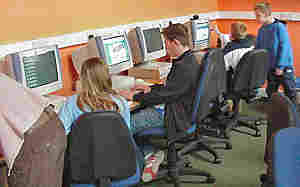 The Future can be shaped by the people of Trimdon.
The Partnership asked everyone who attended, no matter what age, to put forward suggestions, ideas and thoughts for improvements in their local community. Lots of opinions were put forward all of which will be considered by the Partnership in their Forward Planning.

Its not too late!!

Didn’t have the chance to put forward your idea? Its not too late simply send it to:

Surfing in the Centre!
Everyone who attended the Event had the opportunity to become ‘interactive’ on the Trimdon 2000 website.
This embryonic ‘site is waiting for community members, groups and organisations to express an interest in having access to this community information access point. Training can be provided to allow independent access to the website.
The workshop was combined with a competition to win a new Dell Desk Top Computer, donated by a local businessman Gary Atkinson of Xenosys. Gary, who developed the site on behalf of Trimdon Digital Community is keen to see the site working to its full potential. See www.trimdon.org.uk