Heart of community reopens after £84,000 refurbishment

Eight years ago, Home Housing set aside two bungalows in May Crescent to be used as a communal facility. But because the building was laid out as two separate houses, the activities and events it could host were limited within the small rooms.
The CRT grant has enabled the voluntary committee that runs the centre to have a central chimney removed and the two bungalows knocked together to create a large main hall, which can be split with screens when smaller meeting rooms are preferred.

Other refurbishment work included new doors and ramps, to provide disabled access to the building and access to the garden, new toilet and kitchen facilities and redecoration.
The improved facilities will enable the committee to lease the room for events, generating income to pump back into the centre, and to hold bigger committee events and public meetings.
They also hope to organise events they could not previously accommodate, such as dance and keep-fit classes, and invite more people inside as the capacity has risen from 30 to 70.

Volunteer Christine Carter said:
“It looks wonderful, which makes people feel proud of their Community House and want to use it. We’ve surveyed people on the estate to find out what they want at the Community House, so we’ll look into meeting their demands. They suggested things like arts and crafts, health visitors, especially for children, council and police surgeries, first aid and computing courses.”

Joanne Luke, who helps in the running of youth clubs at the centre, said:
“We had to close for two months while the work was done. People have been asking when it will reopen, which shows how keen they are to get involved. It will enable all the community, including the kids, to do more in the centre, which is important for community spirit and to get to know our neighbours.”

A major street lighting improvement scheme for the “Council House” estate in Deaf Hill / Trimdon Station has recently been completed.
The scheme was part of the Communities FIRST project which encourages service providers to work more closely with local people and be more responsive to their needs and concerns.
The programme has completed 41 lantern conversions from yellow to white light. Research suggests that such lighting improvements increase people’s feelings of safety and security and encourage people to move about more at night and engage in more social activities within the community.

Poor street lighting was identified by residents as a key issue during the consultation phase of the Communities First project and was included as part of the Project Action Plan. The work has been completed by the lighting section of Durham County Council and the monies for the work came from the Neighbourhood Renewal fund.

Christine Carter of the Trimdon Station Residents` Association said, “ The estate was not well lit which meant that some people were afraid to come out after dark. The new lighting has made a tremendous difference to the area making it a lot brighter. Hopefully, people will now feel safer and more confident when walking around the estate during the hours of darkness.” 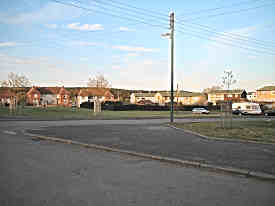