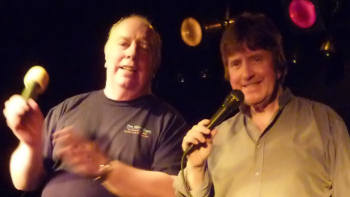 The last forty years has seen both having successful solo careers on the North East and National Club circuits.
Tony Martin not only sang with the Blue Caps but also had successful spells with the Teesside Panthers and the very popular Zephyrs. Nowadays Tony is one of Clublands busiest vocalists.
Eric says “It seems like only yesterday that Tony and I and the rest of the lads were standing outside the Cavern in Liverpool in 1963” wondering how long the music would last.

The Zimmer Frame Balls are a chance to play all the old music we thought we’d forgotten. Many people in the audience treat it as a special social get together, meeting friends they haven’t see for years.
The concerts so far have been a resounding success with sell outs at nearly every venue. Both perform separately and easily filling a whole evening at the fraction of the cost of a four or five piece band

Saturday 14th November 2009 is the last night of the tour and the end of an era as Tony Martin is hanging up his microphone and heading for a happy retirement in the Dordogne, France.

It’s fitting that the tour should end in the village that the Blue Caps first started playing back in 1962 at Deaf Hill Welfare Hall.