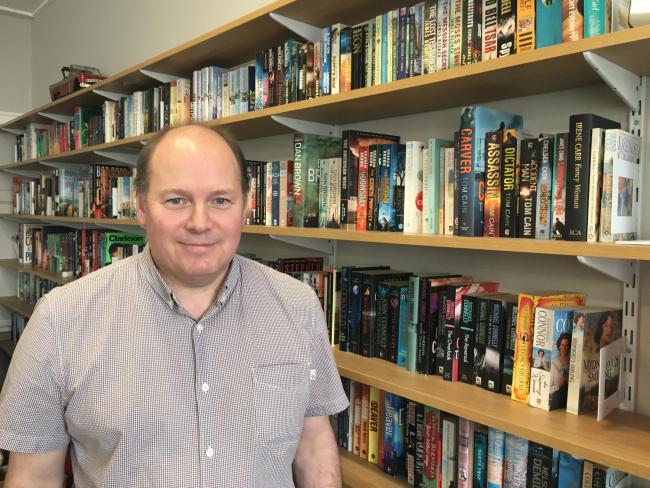 A COMMUNITY centre in the Trimdons has seen a boost in numbers of people coming through its doors thanks to a much-needed overhaul of its library of 6,000 books.

Trimdon Station Community Centre, on Station Road, Trimdon Station, manager Derek Bradley has welcomed the increase which he believes is down to a recent refurbishment of its library. In July the library was fitted with new floors, bookshelves, chairs and tables.
The more than 6,000 books in its collection – of which only about 4,000 are on show – have now been been computerised making them easier to locate.

Mr Bradley said: “There aren’t many community libraries and we’re bigger than some of the county libraries.
“We even gave our spare books to Bowburn Library – about 1,500. It’s a much better room. The floor was peeling and it wouldn’t clean easily.
“We’ve got new tables and chairs. We’ve seen an increase in people coming in for books and the fact they are now categorised means we’re not scratching our heads thinking ‘do we have it’.”
The large library, run by three volunteers, has a wide range of books from covering different genres. It also has a children’s section. And if there are any queries Mr Bradley calls on the help of former librarian Robert Iddon.

A hub of activity, the room is used as a meeting place for the centre’s youth club and its men’s Cree group and women’s Cree group, which celebrated its sixth anniversary this week.

Its overhaul was made possible with funds from the East Durham AAP, which were part of a youth grant, as well as cash from the County Durham Community Foundation and the Deaf Hill Ward Regeneration Partnership.
Youth grant funds also helped cover the cost of purchasing an air hockey table, a pool table and two Ready-or-Not tots to help new mums-to-be.

“The kids think it’s great,” added Mr Bradley. “We’ve also bought a PS4 and a TV so they’ve got more things to do.
“The space is bigger and better and it’s given them more opportunities.
“It’s providing something for the community because the community has nothing and there are no services here.”