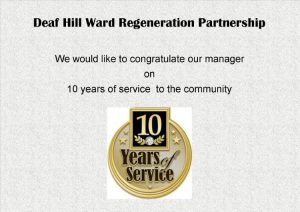 So where has the time gone, quick snapshot of my time working at the Centre, briefly sharing the highs and lows.

When I first started it was a challenge, the building not opened that much, many young people disengaged in the community, in fact I always say ‘I wouldn’t take them to the end of the street, let alone out of the village’, these are now young adults and is always nice to see what they have achieved and a pleasure to see them calling at the Centre.

I have supported countless people of all ages, when the system has failed them, brought in additional services to a community that has very little. I also brought Jo Taylor to work at the centre as a youth worker, supporting her through her degree. Together we developed an excellent young people’s volunteering programme which the Centre has benefited from greatly. There won’t be many people who come to the Centre I haven’t helped, always maintaining ‘if I cannot help, hopeful I will know someone who can’.

I have experienced the up’s and downs over the years while I have been here I have been shot at, threaten,  had to take out restraining orders against someone and verbally abused, especially by people who should know better. In 2012 I was involved in a fatal crash, something I will never forget; it was and is still a difficult thing to come to terms with.

I was once told by a County Councillor ‘this isn’t your community’, there is also a group that has voted not to support our building, which is so disappointing, many very rarely come into the building and some not at all to see what we do.

To give an idea what I have brought into this community, I have guesstimated that we have turned over, in excess of £500k for services and support for the building over the last 10 years.

It is a constant struggle bringing in funding or additional services to a village which has nothing. We even saw local funding cut by two thirds. We have such a lovely Centre which is accessible to all, even to our function room. It is up to the community to use it or lose it.

Over the years I have supported many things, overseen many christenings, naming ceremonies, birthday parties, celebration events and many weddings. I been invited to a number of weddings, seen a number of births (not literally, even though I did convince someone I was at a birthJ), 2 of which are my godchildren now, and even became an adopted grandad, all of which was totally unexpected. I am also looking forward to the birth in September, which would have been the  great, great grandchild of someone I once worked with…..I am so feeling old!!

I have met some really good community workers; sadly some aren’t with us anymore and I have worked with some great organisations.

I would like to personally thank my Chair Jim Grigg, all my trustees who without their support Trimdon Station Community Centre wouldn’t exist. Thank you to all my volunteers, especially at the moment while I am unwell, without you all we wouldn’t be able to deliver what we do.

BUT, it isn’t about me, I am doing my job, all of this wouldn’t have been possible without my volunteers, especially my trustees and who continue to go unrecognised for the many years’ service to the village.

So what’s for my future some will be happy and some disappointed to know…… I am not leaving and intend to build on the last 10 years.

Thank You all for your support over the last 10 years

p.s watch our Facebook page for our summer programme, including a show by Garlic Theatre, family days out and other activities.