Melanie Henderson lives with her fiance Trevor in Trimdon Station, and is due to be married on 17th July 2010.

Nothing unusual about that, you may think, until you find they are both totally blind. They first met on a website for blind people almost two years ago. 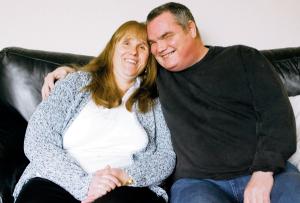 Melanie became blind at 21 years old, having known her eyesight was failing but not expecting to be totally blind at such a young age. Further problems led to her eyes being surgically removed to alleviate pain. This in turn left her with epilepsy, which fortunately is controlled by medication. She had two sons at the time, but their father could not cope with Melanie’s loss of sight, leaving her to bring up the children herself. A difficult situation for anyone, harder still for someone with a severe disability, but Melanie is now proud Mum to two young men aged 18 and 21 years. Only her Mum stayed in touch, as sadly even her two sisters and brother found it easier to stay away.

Losing your sight is a major challenge, with simple tasks becoming a huge obstacle to overcome. Learning to cook, wash, shopping, sorting clothes out into the right colours etc., all the everyday tasks had to be relearned. Melanie hadn’t at first realised how losing a major sense could change your life, but says she has achieved so much more since since then – what the eyes don’t see you make up for with other senses.

She says “You hear so many people grumble, but I used to work for a children’s hospice and have seen little children suffer, so I try not to grumble. You get out of life what you put into it.”

Trevor, a talented musician, lost his sight when he was just five, and lived in Trimdon Station when he met Melanie. Travelling to meet each other meant a trip of 130 miles, which is quite a distance for anyone, but all the more stressful when blind. These to-and-fro expeditions lasted for six months, until Trevor had to move to Hull to help care for Melanie. When Melanie was well enough, they decided to return to Trev’s native Trimdon.

Having decided to marry, Melanie and Trevor are keen to stress the support they have received from Trimdon people. Neil and Derek from the Trimdon Station Community Centre are helping organise their special day, as funds are limited and everything is being done locally. The couple started with only a few guests, but could end up with as many as one hundred and fifty for the afternoon and around the same for the evening reception. Melanie says special thanks should go to local shopkeepers Dennis and Joyce Jordan, quote:

“Dennis Jordan and his wife Joyce are brilliant, they are a credit to society. If there were more people like them the world would be a happier place.”

Melanie and Trevor are to be married on Saturday July 17th 2010 at Peterlee Registry Office, then are having their wedding reception at the Welfare (Community Centre) in Trimdon Station.

One final quote from Melanie;

“I just want to thank all the villagers for accepting me, they are just lovely, but especially my Trev. I am just so pleased I met Trev. I just want to thank my fiancee for making my life that much more bearable. Before meeting ‘my Trev’ I had no self confidence and was at a very low ebb. ”