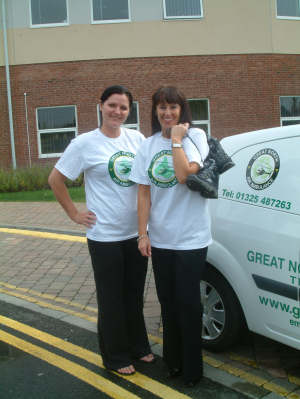 A local NHS worker is set to embark on the challenge of a lifetime, all in the name of charity.
Deborah Conkerton from Trimdon village in County Durham will tackle her first trek across the Sahara Desert, dubbed as the “toughest foot race on earth” in November.
The ten day trek will see Deborah walk 9-12 hours a day across the sandy and sometimes rocky terrain. Her greatest feat will be climbing the highest and most extensive sand dunes of Chegaga, at the south east of Erfoud.

Deborah who works for Tees, Esk and Wear Valleys NHS Foundation Trust is no stranger to running having taken part in a number of local charity runs in the past. The Sahara Trek however will see her fitness tested; endure extreme temperatures and will be at the mercy of the desert weather, whilst raising money for The Great North Air Ambulance Service.

Flying out on 5 November to Marrakech, Deborah is now appealing for your support in sponsoring her, to raise as much as she can, for this very worthwhile charity. So far she’s received sponsorship from friends and family for over £2000.

You can pledge your support for Deborah by emailing deborah.conkerton@yahoo.com

Deborah who works for Tees, Esk and Wear Valleys NHS Foundation Trust said “Completing the Sahara Trek has been an ambition of mine for a long time. Trekking across the Sahara seemed perfect and I am doing it for such a worthwhile cause, that I truly admire. The Great North Air Ambulance does such a fantastic job and this is my way of giving them my whole hearted support”.

Mandy Drake, head of fundraising for The Great North Air Ambulance Service said “Deborah is about to embark on a huge challenge and we wish her all the best! We are delighted that she has chosen the Great North Air Ambulance and so far the money she has raised covers the cost of one mission, which could make a huge difference in the outcome of a serious ill or injured patient. She should be extremely proud of her efforts.”