From the pen of Mark Robberts…..

THE LION ROARS
A couple of months ago I made mention of the fact that one of regions oldest and more notable pubs, the Red Lion in Trimdon Village, had been sold and was in the hands of a local builder and that some were concerned about its future.

I feel that there is no greater sadness than the sight of an empty, boarded up public house; no music, no laughter or clinking of glasses. Having bemoaned and written about pub closures in the past; a figure that according to the British Beer and Pub Association, is currently running at 27 per week, I am absolutely delighted to report that the Red Lion opened for business on Friday 14th May.

I have no doubts that John and Ginny will succeed for they exude determination and a common-sense attitude. I also believe that the Red Lion – a free house – will once more become the Trimdon pub for social evenings, for family get-togethers, a friendly atmosphere and certainly good, wholesome, inexpensive meals. If the recent meal my wife and I had there is anything to on, their future is assured.

Everyone will wish John and Ginny the very best of luck 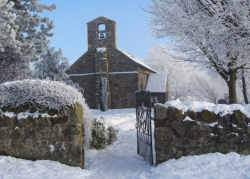 I do not know how many listed buildings there are in the North East villages, but how many are able to boast they possess a grade two listed church in their parish? Trimdon Village can – and the residents should be justifiably proud of this.
It is a church building that dates from circa 1145, but a record from the 19th century describes it as; ‘a ruinous, neglected-looking edifice… exceedingly damp, and the only indications of recent attention to the edifice being a coat of yellow ochre in the interior and an external white washing.’

Over the following years, due to the care, diligence, effort and financial contributions by proud residents of Trimdon, things have moved on with quite noticeable renovations and improvements, so that the historians who described the church thus, in the 19th century, quite probably – apart from the exterior – would not recognise it as it now stands. Sadly however, in the 21st century the fact is that this grade two listed building could revert to being, ‘a ruinous, neglected-looking edifice… In other words, do a ‘Corus’and if so Trimdon would lose much more than a listed building. The village would be a sorry, poorer shadow of its former self, in mind, spirit and body.

And yet, in spite of this Mary Magdalene still retains a small, but dedicated band of ‘helpers’ and supporters, many of whom are not averse to dipping into their own pockets where appropriate. As such they richly deserve the accolade that recently came in a letter from the Archdeacon of Durham, the Venerable Ian Jagger, following his recent visit, in which he said:

‘Dear Mr Burton and Mrs Robson; Thank you for all your preparations for my visit on 21st January. It was such a pleasure to come into a well-kept church and meet with a bunch of people who take such good care of the place and make it feel properly lived in. Not to mention being good friends, which cannot always be counted upon……’

Whilst times and attitudes modify and change, the Christian message does not and it is there for all, believers and non-believers; nevertheless, Mary Magdalene could join all those other places of worship that at best have become luxury homes for the lucky few, rather than refuge and comfort for the many. At worst, crumble and return to the land it once dominated. The signs are already there; for the very first time balance sheets show the church in deficit, a trend that could only escalate in the future.

It is strange but true that the church regularly receives letters of support from those who have moved far from Trimdon. Whether to permanent pastures new or temporary absence, but undoubtedly from those who consider the church a true symbol and representative of home and times past. Over many years St Mary Magdalene has been a friend, there for those who needed her. Now however, she is the one who requires support; could you be that friend? 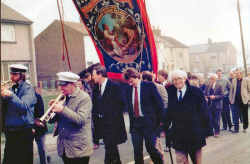 Whatever one’s political leanings, there are some politicians who leave an indelible mark; one of those being Michael Foot, MP who recently passed away aged 96. A fine speaker and politician, a man – some said, better suited to criticism than construction; who spent much of the latter part of his political career trying to unite a party he had appeared eager to divide. In February 1982 he appeared in Trimdon to commemorate the Trimdon Grange Disaster. But in the accompanying picture, who is the young man accompanying Michael Foot, described by the latter as a ‘man for the future’? 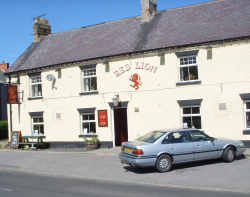 And still on the note of passing; it is sad to report the eminent demise of a long-standing local landmark in the form of Trimdon Village pub, the Red Lion. This long-established and respected public house – possibly the finest in the village – that has played host to more notable occasions than this column could recount, has, in spite of the efforts of the current landlord to secure the tenancy for the village, passed into the hands of a local builder. What the future has in store for this building and the adjoining allotments lovingly tended for more than half a century, only the future can tell. One can only hope the fates are kind and sympathetic.