Wednesday 23rd July 2014
Chaytor and Austin family research
Hi, I am hoping that someone may be able to help me with information about my great grandparents, Ralph Chaytor and Jane Austin. They were married 25th December 1875 at the registry office in Lanchester and residence at the time was Leadgate. My grandfather was William Austin Chaytor born 14th April 1877 at Bradley Brickworks Medomsley. I am trying to trace the death of Ralph who we believe was killed in an accident, my great grandmother Jane emigrated to New Zealand where she had family and she remarried there in 1885 and from there to Australia around 1890, she died in Sydney in 1936. Any information at all would be a great help in finding out what happened to Ralph. Thanks in advance, Dot Sweeney

Friday 25th April 2014
Fred Carter (died 1940)
Sergeant Robert Frederick Carter was an RAF pilot who was killed in action in April 1940. He is buried in Deaf Hill Cemetery. I would like to contact any family members. One reason is to try to establish whether he was engaged to Peggy Richardson, an aunt of mine. Thanks, Bill Richardson

Friday, 18th April 2014
Memories of Trimdon between 1962 and 1966:
Hello! I am the young boy (no more now,) who came to Trimdon from France for holidays a long time ago in Doctor Caldeira’s. Does anyone remember me? If yes,please be in touch.
Thank you. Jean-François CHAPELAIN (France)

Tuesday, 15th April 2014
I am trying to find any relatives of Joe and Mary Rowley, my grand parents. My parents were Bill and Nellie Stewart. I am John (Jack) living in Bradford. I wonder if there is anyone reading this who could help me.
This came to me out of the blue. A picture of NUM Durham area Trimdon Grange Colliery. From a councillor George Stewart, chairman of Policy and Res Committee of Trimdon Parish Council, to cousin Billy and wife Pudsey, 1988 to 1989. I wonder if there is any way you could help me to trace any one. Living in hope,
Yours, Jack Stewart, 34 Wharncliffe Road BD18 2AD

Friday, 7th March 2014
I have recently found out about my great-grandfather who was the Waste Manager at Trimdon & Deaf Hill Colliery (c1900?) Photo here. His name was Wilkinson (I don’t know his Christian name) possibly born in 1860s? – his daughter Ruth was my grandmother (born late 1880s?), she married Albert George Furness (born in 1883), their eldest son was my father – also Albert George Furness (born 1914). I don’t know anything more about any other Wilkinson relatives I might have still in Trimdon? Do these names ring a bell with anyone?
Thank you, Fiona Furnes

Wednesday, 12th February 2014
Ms. J Dawkins identified her grandad Jessie Lockett on the right of a picture on the Welch album on our photo galleries.in July 2012. Mildred Thompson, who provided the photos would like to contact you if possible. Please contact the Trimdon Times if this is possible.

Saturday, January 25th 2014
Subject:Arthur Skelton.  A Mr Whitehead is searching for Mr. Arthur Skelton, formerly of Trimdon Grange, who was a Store man at 6 Command R.E.M.E. Workshops, Flagstaff Road, Colchester, in 1956 to 1958 believed to be living in Nottingham. Arthur was a miner in Trimdon prior to joining the army, he will be about 76/77 or maybe slightly older. If anyone has any information about this Arthur Skelton, would they please in the first instance contact Trimdon Times.

Tuesday, December 31st 2013
I’m researching my family history on my mother’s side and I’m trying to locate people who are related to Catherine Bell who was born in 1902 at Trimdon, her father was John Bell and she married John Glaister in 1920. Catherine could have been christened at St Pauls church at Trimdon Colliery as I know a family member was married there.
I would be grateful for any help anyone can give me as I live in Stoke on Trent, I have been told that she was known as Kitty, I now believe I have found her on the 1911 census as Katie.
Regards, Dawn Meakin, email: dawnmeakin42@hotmail.com 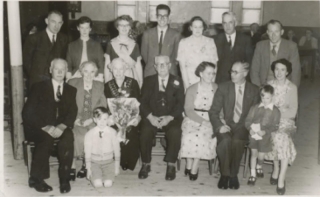 I am trying to find some information about this photograph and the people in it.  Front row on the left is my granddad, John George Hamilton, and his wife Isabella (nee Salley).  They were a Methodist family and lived in Sycamore Crescent, Trimdon, until their deaths in the early 1960s. I remember my grandfather spending a lot of time playing snooker in the early 1950s. There were four children:
John George (known as Jack),
William (my father)
Emily (Mills after marriage)
and Mary hamilton who died in 1927

If you are on this photograph or recognise anyone on it, I’d love to hear from you.  Many thanks.  Marion K.

*** 2nd Nov 2014: Marion’s response to a message forwarded via this website: Quote:
“Dear *****,
What a surprise.  Yes, Gladys and Bill were my parents.  I immediately remembered your name, and as living at numbers 54 and 55, so we must have been there a few years.  I was born in 1939, then left Trimdon School when I was 11 and moved from Trimdon to Wingate – in 1954, if my memory serves me right. Did your Na-Na live in the steel houses?  Can’t think why I remembered that and might be wrong.
I left Wingate in 1958 to work in the South, returning briefly in 1960 to get married.  I became a PE and swimming teacher.  My husband is a Wing Commender in the Air Force so we travelled the world and had a wonderful life.
We have two married sons and two grandchildren.  we recently moved from Somerset to Salisbury – closer to our younger son.  Ron lost his lovely wife years ago and now lives in Cornwall.  His son now lives in the NorthEast with his family and we have recently visited them.”

Sunday, April 21st, 2013 at10:30 pm.
I am searching for information about my Great, Great Uncle Aaron Barratt and his wife Maria (nee Attwood), on 1911 census they lived at Jasper House, Deaf Hill, Trimdon. After spending almost 50 years in Australia they returned to Trimdon in 1959, where Aaron died in 1960. Their nephew, S Cairns is named on the death certificate, is there anyone still living in Trimdon by that name, I would be most grateful for any information, many thanks Jayne Jones.

*Contact details such as email and phone numbers are not published (unless you specifically want them publishing)- we do not pass on anyone’s contact details without their express permission.