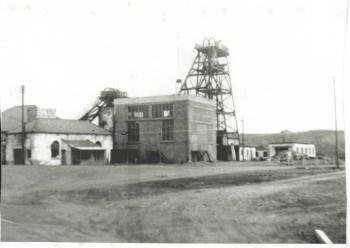 Early one schoolday morning in September 1929 I was awakened by voices downstairs. While knowing that it could not be 7 a.m., my usual time for getting up, I lay for a few minutes before going downstairs. There I saw Dad stretched across the table, with his chest resting on the table, and mother trying to comfort him. There he was in his pit clothes, pit grime and all, and in pain. I said I was going for the doctor but Dad told me not to bother calling him till later – that I should call him on my way to school.

Dad had been assisted home by Mr. Holvey (Jake), a neighbour, who had just finished his shift as a deputy. After the doctor had visited, kind neighbours helped mother to wash Dad and get him into bed. Memory of what actually happened day to day after that is very vague, but certain things I can remember.

I can particularly remember a visit a few days later by Mr. Lister (Johnnie), who was The Banksman at the time of the accident. The accident – Dad being crushed underneath the cage. I was in the room while Mr. Lister was visiting. He seemed so upset and I heard Dad say, “Don’t worry Johnnie, I’ll not say anything.” Some time later Dad was sent to Sherburn Hospital for a goitre operation. This goitre, said the doctor, had been aggravated by the accident. Some time later, when Dad had recovered a little and was back onto his feet, he told me what had happened.

Occasionally, the en-setter’s duties entailed crossing the sump and going to the back of the shaft. The sump was covered with fastened down boards. Dad had reported a loose board to Mr. Burdon (George), the shaftman. After an inspection to see if the repair had been done. Dad was returning from the shaft bottom area when he saw the descending cage. Throwing himself forward, he was unable to get clear, the cage pinning his face down, and resting on his shoulders with, fortunately, his head and neck free.

The men who were there waiting riding time at the end of their shift, could hear Dad saying, “rap 11/2′. No one knew how to give half a rap. Meanwhile someone had gone round to the coal drawing shaft and informed Hughie Barr, the on-setter there, who was quickly on the scene to release Dad. Dad told me that there was no signal of three raps for me to descend. That was why Mr. Lister was so upset…

Nineteen years later in 1948 Dad died, never having worked a shift after the accident.

After an autopsy, there was an inquest in The Welfare Hall at Easington. My mother and I, along with the compensation secretary, attended this inquest. The coroner announced at the autopsy that Dad had died of natural causes. We remarked to the coroner that seeing as Dad had never worked a shift since his accident, how could they say that he had died from natural causes. The coroner in a sharp authoritative voice replied, “Are you for a moment doubting the findings of the pathologist?” I was very bitter thinking of Mother’s 19 years of struggle with a compensation pittance and then to be denied any further payment.

Thank goodness that great progress has been made to see that workers get their rights and entitlements and that employers meet their responsibilities.