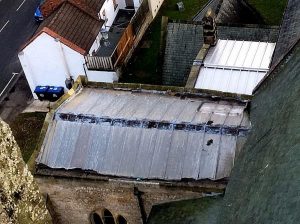 Water was now seeping into the building and threatening roof timbers which date back 800 years as well as the only 18th century box pew in the church. He has branded those responsible as “avaricious individuals with no respect for centuries of local history.”

It is not known exactly when the theft took place. It was discovered at the weekend when Mr Mutch climbed to the roof of the tower to check a problem with the flagpole.

“It is appalling that anyone should cause damage of this magnitude to such a beautiful building”, said Mr Mutch.

A specialist roofing company has been brought in to identify the full extent of the damage so that temporary repairs can be carried out. Police are also investigating.

The latest theft comes eight years after another major raid on St Edmund’s when thieves stripped lead from the roof of the south transept and above the organ loft which cost £24000 to replace.

Earlier this year, lead was stolen from the ‘hips’ on the lych gate at the church and damage was caused to the roof tiles. The repair bill is expected to be in the region of £2000.

Services at St Edmund’s, says Mr Mutch, will not be affected by the theft.