Court News 17th Dec2014
On 15/12/2014 Aaron Maddison, 24 years, of May Crescent, Trimdon Station, was arrested on suspicion of burglary x3, a public order offence and traffic offences. Maddison was later charged with these offences and Bail was refused and he appeared before Peterlee Magistrates Court where he was remanded in custody until 05/01/2015, when he will appear before Durham Crown Court.

On 09/12/2014 Christopher Barnett, 24 years, of Wood View, Trimdon Station, was arrested on suspicion of the burglary of the butchers shop, Blackhall (on 03/12/2014). Barnett was later charged with this offence and one of domestic assault. Bail was refused and he appeared before Peterlee Magistrates Court where he was remanded in custody until 05/01/2015, when he will appear before Durham Crown Court.

Information Appeals.
On 30th November a vehicle in Meadow Road, Trimdon Village has had a wing mirror damaged. If you have any information regarding this incident please contact us on tel:101

A renewed appeal for any information that may lead to the identification of a suspect responsible for causing damage to a Nissan Qashqai that was parked on the driveway of an address on Willow Road, Trimdon Village, overnight on the 28/09/14.
Anything witnessed or information received third hand following the incident, contact OIC PC 335 RUCK at Newton Aycliffe Police Station on 101.

Overnight 11/11/2014 an allotment has been broken into off St Pauls Road Trimdon Colliery. Offenders have forced to locks and entered a shed fortunately nothing has been stolen. Anyone with any information in relation to this crime please contact us and quote DHM-11112014-0137.

As a result of this incident Trimdon Colliery Allotments are now part of the Smart Allotment Scheme local NPT officers have issued new signs and property marking paint and equipment in order to prevent further incidents of this nature.

Good Feedback for Durham Police.
We are feeling very proud at being assessed by the official police watchdog HMIC, as being the only force in the country graded outstanding at investigating crime.

Wnternights Advice.
Please don’t make it easy for burglars, follow the advice given. 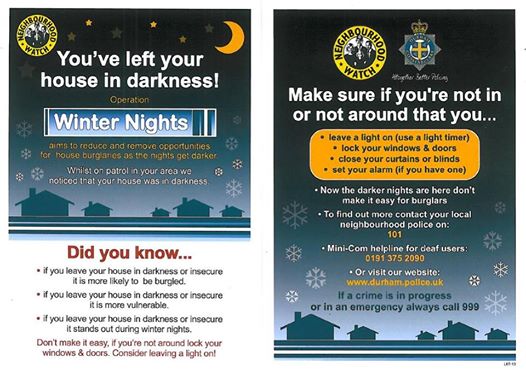 Photo: Whilst on foot patrol earlier this evening 32 of these leaflets were delivered to houses found in darkness. Please don’t make it easy for burglars, follow the advice given.