I was diagnosed with myeloma in 2006 at the age of 55 in very dramatic circumstances. I was brought up in Trimdon Village, County Durham, but at the time of my diagnosis I had been living in Swansea permanently for 28 years. 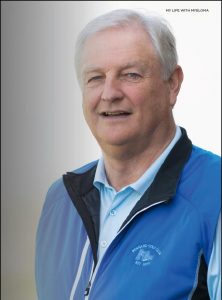 I was head teacher of a comprehensive school in the Swansea Valley (Ysgol Maes-y-Dderwen in Ystradgynlais), and married with five grown-up children. I would regularly spend part of my weekends playing golf but I had developed a pain in my shoulder and was concerned that I may have damaged some ligaments, so I visited my GP who advised that I have an X-ray taken.

I attended the X-ray department of the local hospital on Wednesday 12 July 2006, near the end of the summer term. I was surprised that after having my shoulder X-rayed, further X-rays were taken, this time of the whole of my body. The radiographer suggested I should contact my GP the following day for the results. However, I forgot all about it during the Thursday, due to another frenetic day at work. As usual, I was looking forward to the summer break and feeling very tired after a hard term.

During the Thursday afternoon I received a phone call from my GP while I was at work (an unusual event in itself) who told me to attend the Orthopaedic Outpatients’ Department of the local hospital the following day as something had showed up on the X-rays. Naturally, I asked what this something was but received no clear answer; I was told that the Orthopaedic Consultant would explain further when I attended. As you can imagine, I did not sleep well that night but I convinced myself there was nothing to worry about: it was only shoulder pain after all.

My wife came with me to the hospital and I was dressed as usual for a work day, intending to go from the hospital to the school after my appointment. I arrived at a packed Outpatients’ Department but within about a minute of registering at the desk my name was called, much to the chagrin of others who had been there some time before me.
The consultant walked into the room where my wife and I were sitting anxiously and he showed us an X-ray of my left femur. Even with my limited knowledge of biology, I knew this bone was in the leg and since my problem involved my shoulder I thought there had clearly been a mistake. However, to my surprise, the consultant expressed more concern about the deterioration of the load-bearing femur which he maintained could snap at any moment. He asked if I was experiencing any pain in my leg, and when I told him I thought that that particular ache was due to an old sports injury and I had been trying to ‘run it off’, he recoiled in horror at what could have happened if the femur had collapsed. He then put the X-ray of my shoulder on the screen and referred to the ‘shadows’ on both images.This sent alarm bells ringing.

In that moment I was informed that I had something serious and the first priority was to ‘nail’ the femur. I was told that if a bed was available I would be admitted immediately. The process of ‘nailing’ my femur involved replacing the damaged bone with an aligned metal pin, allowing this to take the pressure and do the work of the bone. An operation on the femur would be done first and then followed soon afterwards by another on the shoulder, where there was more bone damage. When I asked how soon it would be before I could return to work after these operations, I was told that it was highly unlikely that I would ever work again as this serious condition would require long-term treatment. My wife and I looked at each other and realised our lives had changed forever in that instant.

That weekend I contacted the Chair of Governors of my school to inform him of the situation. I gave him a letter for all the staff, detailing the reasons for my absence and informing them that it was highly unlikely I would return.
The following Monday I was admitted to the Emergency Orthopaedic Ward of the hospital and a couple of days later I had the first operation on my leg. During the procedure, samples of the bone were taken for biopsy, as there had still not yet been a formal diagnosis of my condition. The name of my new enemy was yet to be revealed. Just before the operation on my shoulder four weeks later, I was told that the results were ‘inconclusive’. I then had the second operation and my shoulder was also ‘pinned’. After a further two weeks in hospital I was finally allowed home. I had spent six weeks in Morriston Hospital in the hot summer of 2006 and had received two major operations but the doctors still did not know what was wrong with me.

While at home five days later, I received a call from the consultant’s secretary who told me the results of the tests were back and that they were conclusive: they had a diagnosis but it could not be disclosed over the phone. I was to attend the Outpatients’ Department once more the following day. Another poor night’s sleep was assured.
Again, I jumped the queue at the hospital and was whisked into the consultant’s office very soon after arriving at reception. When the doctor entered, I was aware of other medics entering the room and standing around me. I became conscious this was to be a significant moment in my life. He told me that he had some good news and some bad news, sounding rather like a music hall comedian about to tell a joke. I asked for the bad news to be disclosed first. He told me that I had incurable bone cancer with plasmacytomas. (It was not until a couple of weeks later that I heard the word ‘myeloma’, though I did encounter the term when I later ‘Googled’ plasmacytoma on my arrival home.) The good news was that it could apparently be treated.

Within a couple of weeks the treatment began at Singleton Hospital in Swansea, and three bouts of radiation treatment and five rounds of chemotherapy followed over the coming months. It culminated in a challenging stem cell transplant in February 2007, and it took a further six months of convalescence before I began to feel anything like myself again. Fatigue remains a legacy of the treatment, but now I can genuinely say that I have a life worth living. I would not have been in this position without the excellent work of the NHS staff at Morriston and Singleton Hospitals in Swansea.

More than ten years later I lead a fairly active life, albeit with less energy in my tank than there used to be. I have to consciously manage my energy levels. I am sustained by the love of my family and my determination that myeloma will not prevent me from having dreams and achieving goals. My ambition is not dead yet.
I was told that I would never play golf again because of the surgery to my shoulder. At the time just prior to my diagnosis I played to a handicap of 11; I now play to a handicap of 18.
After treatment, I could no longer run or do high energy sports so I started to play the piano and currently play at Level 5/6. I had previously written school textbooks when working in education but I’d always wanted to write a novel. My book called Standing Orders was published last year and was commended in the 2017 Independent Author Book Awards. It is the only novel I have come across which features a character who is diagnosed with myeloma. I have now just finished writing my second novel.

Most importantly of all, however, I have attended three of my children’s weddings and experienced the joy of the births of three grandchildren. All this has been made possible because of the treatment I received.
I list these achievements not as a boast, but to demonstrate that the despair I felt at times during my treatment was worth fighting against. During the course of my healing, I found the physical and emotional challenges to be overwhelming at times, and although I look well these days, I still carry emotional scars. There were occasions when I would limp through the house during the early, dark hours feeling desperate. Fortunately, my wife was always there to help me through those difficult times.

The treatment was very demanding in 2006 and I am aware that not all myeloma patients experience the bone damage that accompanied my diagnosis (though some have much more). Fortunately, treatment has improved significantly over the last ten years. The bottom line is that after all the physical demands I endured, I still have a life worth living. I still have the same ambition that I did before my diagnosis, even though my life may have been taken in a different direction than I had planned.

However, there is a caveat to this story. I am conscious that I have only wounded the ‘beast that is called myeloma’ and after ten years, I am increasingly concerned about the long-term efficacy of my stem cell transplant. A second transplant may be just around the corner.
Myeloma may get the better of me one day, but not without a fight.

More information about myeloma can be found on https://www.myeloma.org.uk/