A member of the Trimdon community has received her second call up to represent her country in the sport of dragon boat racing. 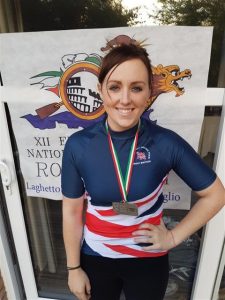 25 year old Rachel Elliott, originally from Trimdon, County Durham moved to St Neots early in 2015 to further her career as an Assistant Clinical Psychologist with the NHS. She joined St Neots Dragon Boat Team in July 2015 primarily as a means of meeting people and enjoying some social exercise. Shortly after joining the club, she got an opportunity to train with the Great Britain National Dragon Boat Team initially as an opportunity to receive some extra training and see what National representation entailed. Rachel seized the opportunity and earned a GB call up to the EDBF European Championship squad held in Rome in August 2016 where she won a silver medal in the 500 metres Mixed 10 person boat event. The Great Britain national team were recently invited to attend the IDBF 2nd World Cup in Wujin, China from 19th to 24th October. Rachel is the only Dragon Boat paddler from St Neots to have received an invitation to the squad.

Rachel said of her call up;
‘I joined the St Neots Dragon Boat Team simply to make friends when I moved to the area. To be able to develop as a paddler and within the year be selected for the national squad was such an achievement. I was so proud to represent my country in Rome, where we won a bronze and a silver medal and now to go onto compete in China is beyond anything I could have imagined!’

SNDBT Crew Captain Ian Knibbs said of Rachel’s achievement, ‘Rachel is a perfect example of everything the St Neots Dragon Boat Team stands for, our primary aim is to have a social and fun environment for the people from the St Neots area to come and enjoy one of the most fun, growing sports in the world. Within this, we are also exceptionally proud of the number of paddlers we continue to produce to compete on the National Stage. We truly believe in supporting all our members to become the best that they want to be.’

Whether you aspire to compete on the national stage, or are just interested in a fun and sociable hobby, the St Neots Dragon Boat Team are always on the lookout for new members of any age, prior experience is not necessary. If you are interested in giving the sport a try, contact us on Facebook, email info@stneotsdbt.co.uk or visit our website: www.stneotsdbt.co.uk for more information.