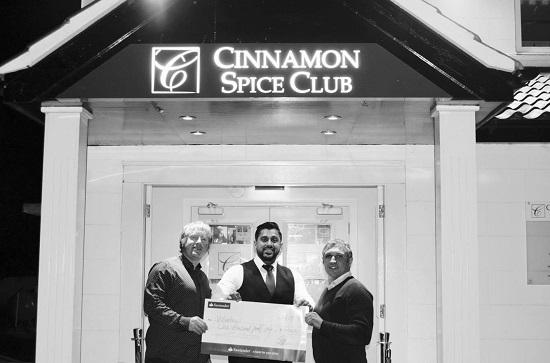 It turns out, they are both winners. Local Indian restaurant Cinnamon Spice Club have agreed to sponsor local band The Voluntears.

After speaking with Sabir Ahmed owner of Cinnamon Spice Club, it became apparent why he wanted to sponsor The Voluntears.

“They are a local band and we are a local business, I speak to the band and i feel their passion and determination. They want to give something back to the community, bring the community together. It takes a lot to make a business work and successful and The Voluntears have got what it takes.”
Whilst sitting in the Cinnamon Spice Club bar with Seamus Edge and Mark Dunn, two members of the band, it became clear that The Voluntears felt exactly the same way.

“When you come to the restaurant, Sabir and all the staff do everything to make everyone who comes through the door feel at home and welcome, nothing is to much trouble, his passion is outstanding which is why i know we will work well together.”
I asked Sabir and The Voluntears where they seen themselves in 3yrs. They both replied ” apart from being a big success, we see a long and fruitful partnership, both giving something back to the community and being part of something special.”
Whilst I sit listening to them all talking about the future, it suddenly dawned on me, every thing they talked about all revolved around one important word…”community”. Around Trimdon there is a lot of small villages, and bringing the community together and giving something back to the community is the first thought of both Cinnamon Spice Club and The Voluntears.

The Cinnamon Spice Club is an award winning restaurant which is going from strength to strength, with many more awards heading their way and The Voluntears are coming to the end of their 2016 uk tour, with a new single coming soon.
In my opinion this partnership is a recipe for success.