Advice and help is available to clear haunted properties - contact details below. 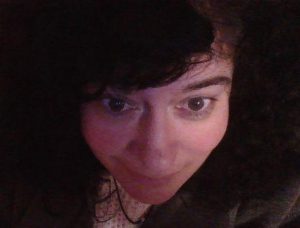 Submitted by Joanne Budd
I myself live in Trimdon and have over 20 years experience of mediumship and clearing properties. I lived and worked in South Africa for many years and trained as a Medium in Croydon Surrey in my 20's.

We saw the Trimdon Times website before we moved to Trimdon and wondered if we would experience anything ourselves when we moved into our new home in Trimdon Station in November 2021; we had even seen all the orb activity at Trimdon Village Hall on Youtube - quite something to catch all of that on camera!

The first night we were here we heard the sound of a key going into the lock at around 10pm and then we heard it again as it woke us up around 4am; this could have been rascals in the area though maybe thinking the property was still empty and it never happened again.

That night I could not sleep well and being clairaudient and clairvoyant I could hear a voice and I also saw what looked like a miners face close up to me and I could smell him too; he smelt damp and dank; he was not hostile or anything but he said to me that what had happened during the explosion down the pit had happened on purpose and that it was not an accident; he did not explain why or how but it would seem that certain people knew too much about certain business dealings going on at the time and this supposed accident/explosion was to frighten the miners into not saying anything about what they knew. He kept saying to me "they had been trapped in there"; it seemed really important to him to tell me this information like he just wanted someone to hear him and to understand it was not an accident.

I acknowledged to him what he said; I then fell into a semi-sleep and as I drifted to sleep I could see childrens hands covered in soot trying to remove pieces of wood and they were stuck under ground and they were with this man who had communicated with me.

The house we moved into in Trimdon Station had a presence and a warm welcoming from these people who had died in the explosion; but it also had at times an unfriendly presence of a male; and at night when you would get up to use the toilet you felt his presence strongly in the lounge area; and as if you were interrupting something by being there; there was also an unfriendly unwelcoming presence in one of the bedrooms upstairs. The males presence did not seem to permeate downstairs during the day; just during the night when he thought you were in bed - it was as if he liked having the house to himself.

One night I got up and sat on the commode downstairs as the toilet was broken and then I walked over to the sink to get a drink of water and a male voice said into my ear "I am going to kill you!"; that's when I thought that I would need to clear the house. I was obviously not welcome there by this spirit.

Another day during the day I was coming out of the downstairs bathroom and talking to my husband across the room and a tallish male figure wearing a grey coat walked towards me clear as day (but I could not see his head or face) and almost through me! I saw him at the time but my husband did not.

Another time again when we first moved in; we both experienced a ghost cat - this time my husband saw the ghost cat when it ran into our front downstairs bedroom in front of him; it was a ginger cat; we also have a ginger and black and white cat so my husband thought he had seen our cat; but our cat turned out to be upstairs at the time. Also I meant to mention on the first night I felt pressure on my leg as if a cat was kneeding his pores into me but I could not see anything.

I sat on the commode in the living room (as our toilet was broken at the time) and a cat jumped on me and startled me in the middle of the night; it jumped on me really hard too and I thought it was one of our two cats but looking around they were nowhere to be seen!

Several times as well I would get woken up in the middle of the night with a dank, damp smelling man breathing over me; I just sensed him there and I only saw his face once, again it looked like a miner; but once he knew I was awake (he had woken me) he disappeared out of the room. I felt like I was experiencing more of this than my husband who had only experienced the ghost cat.

There are various ways you can clear your property of ghosts; not all of ghosts mean you harm, some are unpleasant; some are looking for help or acknowledgement from you or have seeked you out for help but all of them need to be given the opportunity to know they can go home and go towards the light; and some of them might not even realise they have died in the physical sense. From a more scientific position; the vibration of the property you are living in; can also depend on ; ley lines; energy vortices, predecessor history, pollution from things such as cell phone towers, and underground water sources. These can all have an effect and can be worked on if necessary to change the vibration and the outcome.

Some people get really scared of what they can't understand or see; I grew up in a haunted house with all sorts of stuff going on, footsteps going up the stairs at night or when downstairs in the kitchen footsteps in my bedroom!, knocking on doors (especially when by yourself), gym weights being lifted up and banged on the floor, figures standing over my bed in the middle of the night, stuff flying off shelves, pictures being slammed down, tennis balls being thrown in the middle of the night and in the day in the cupboard under the stairs, noises in walls, and people getting influenced negatively by whatever was there (possession).

My experiences growing up in a detached haunted house in Surrey lead me to learn more about ghosts and poltergeists and grow in experience in ghost busting in Cape Town, South Africa and to eventually appear on TV shows out there like "Free Spirit"; I also trained as a Medium in Croydon in my 20's.

I would help clear a lot of properties, and sometimes people, during my work where spirits had got attached to them within their aura which can also affect them in many ways and within their homes.
I enjoy helping people and making a difference through this kind of work.

Since living back in the UK from 2005; I now care for my special needs daughter; but if you need any help with clearing your space if you are have difficulties and are willing to follow my advice and guidance I give; I am happy to help you to resolve and work towards finding a solution to fix the problem. It may take a bit of time but in my experience it usually gets fixed.

I do not take payment for what I do. However, if you wish to make a donation to cover materials used, travel costs and for my time, or for diesel costs if you live a distance away, it is always appreciated depending on what or if you can afford to contribute.