A young man who suffered life changing injuries after a woman hit him with her car says he feels like the one being punished. 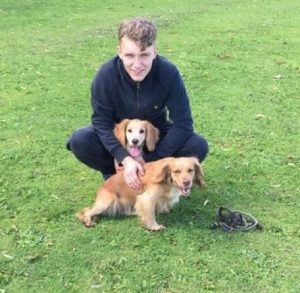 Thomas Gill, 24, from Trimdon Village, had been out for the day with friends and was waiting for a lift home when the incident happened at 12.15am on Bank Holiday Monday, May 31. He was hit by a car on the A177 between Hardwick Hall and Sedgefield.
Thomas said: "The last thing I remember is waiting for a taxi, the next thing I am waking up four weeks later in the intensive care unit after being taken to hospital and put in an induced coma.
"When I woke up I thought I was just having a bad dream. It took a few days for me to accept that I wasn't dreaming and I was actually in James Cook Hospital."
As a result of the accident he was left with a number of injuries including a smashed forehead and cheekbone, shattered eye socket, lost teeth, two punctured lungs and broken ribs.
He needed to have two jaw operations and spent three weeks with his jaw wired together, only able to consume liquid foods.

Thomas said: "In the first week it happened they told my mam and dad it was hit and miss if I would survive due to the bleed on my brain.
"I was strapped up to every machine you can think of, it was just torture.
"I lost the ability to walk, I have been out of hospital about two months now but I still can't walk very well.
"I just feel really weak all the time and I can't really eat properly."
Thomas decided to speak out about his ordeal after being left disgusted by the sentence handed out to the perpetrator.

Emma Kirkup, 30, of Front Street North, Trimdon, was charged with three counts of driving over the prescribed limit, after being found with a mix of alcohol, cocaine and benzoylecgonine in her system. A charge of failing to stop at the scene of an accident was withdrawn. She pleaded guilty at Peterlee Magistrates' Court on September 6.
Kirkup was disqualified from driving for 24 months, fined £320, ordered to pay court costs of £85 and a victim surcharge of £34 - a total bill of £439.

Thomas said: "I was working full time as a dimensional control surveyor before the accident happened, but I have been off sick since and I have no idea when I am going to be fit enough to go back.
"I used to play football and go the gym but I can't do any of that now.
"Due to my head injury I have had my driving licence taken off me, and my shotgun licence, but she has been allowed to drive around right up to the court date."
He added: "I've lost all of my confidence and the ability do do all the things I enjoy, and all she gets is a two year driving ban and a fine.
"I am the one being punished, not her."

The accident has not only affected Thomas but has had a life changing effect on his whole family, he says.
His mam, Anne Gill, 51 said: "Our world has been turned upside down. I work for the NHS and I haven't been able to go back since it happened.
"You don't expect your son to go out and not come back home. He could have died that night. It is totally morally wrong, she will have her license back before he has his life back."
Thomas feels let down by the justice system and is planning to write to his local MP.
He said: "I don't think its fair, I think the law is all wrong. I am going to write to whoever I need to try and appeal to get the law changed.
"I don't want anyone else to have to go through what I am going through."