World champion Thai Boxer Jordan Williams has impressed Council Chairwoman Pauline Charlton with his skills, when he made a visit to see the Chairman at her invitation. 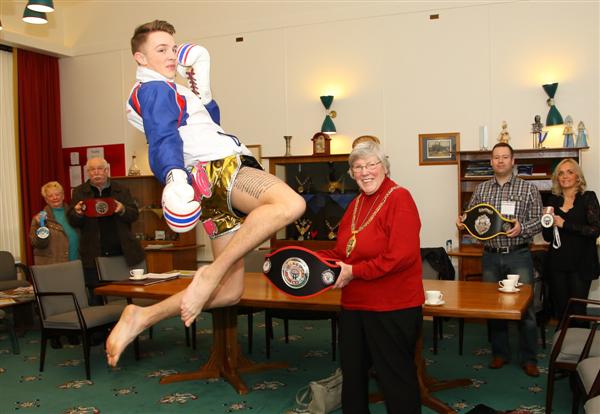 Jordon Williams 16 of Trimdon Village impresses Durham County Council Chairwoman Pauline Charlton, when he was invited to the chairmans room to show her his world championship medals, watched by (L to R) Maureen and Brian Ferguson (one of Jordans sponsors ) Steven Wright trainer of Erawan Thai Boxing in Trimdon Village and Zoe Goodum Jordan’s mum .
Picture by Keith Taylor

Chairwoman Pauline invited Jordan along for chat at the chairmans office after she had read of his recent success in The Northern Echo.

She said” It’s fantastic that a young man from County Durham has achieved such heights, all credit to his family, his trainer, his sponsors, and Jordons own hard work, it was a delight to invite him to County Hall to share his success with ourselves”.

Jordan’s trainer Steven Wright of Erawan Thai Boxing in Trimdon Village said, “Jordon has been a pleasure to work with, the Chairwoman has made us extremely welcome at County Hall. I’m pleased Jordon brought along some of his kit so she could see for herself how skillfull he is”.