I’m sure that someone can tell me that I’m wrong but I just can’t think of any other mining village whose pitheap dominated the village the way Trimdon Grange’s did. It stretched from the back road leading from Trimdon Village to the Whinney Moors on the Kelloe road (the Back Ower Lorrin as we called it, although I have never seen this written down before and so I can’t vouch for the spelling – or the accuracy of the phonetics for that matter) right down to the front street of Trimdon Grange and it skirted the Western Edge of this road from St. Alban’s Church almost to the right hand turn into the new road down to Trimdon Colliery. It was immense and its enormity was reinforced by the perhaps 80 degree angle of the slope as it rose to its summit of perhaps 150 feet. First time visitors to Trimdon must have been stunned by its dark bulk looming over the village, but to us its presence, though felt in several ways, usually went unnoticed. Generally speaking it was just there; though it was noticeable that in summer any part of the village which fell in its shadow – and that was the vast majority of it – tended to get an hour or two less direct sunlight than did the rest of the area. However, as if by way of compensation, in winter, when the snow came, Trimdon Grange was blessed with its own private Tyrol and, if in summer the pitheap looked drab and dirty, it was transformed spectacularly by the winter snow. 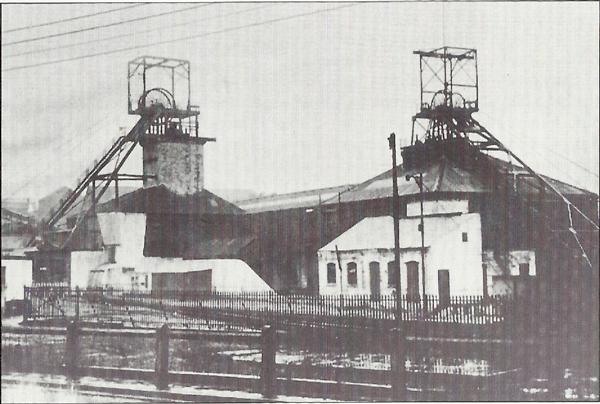 If you had traversed the pit heap from the Back ower Lorrin to the front edge facing the village you would have seen two completely different aspects. At the beginning of the walk the heap was not nearly so high as the front side and was uniformly grey with no sign of vegetation. On reaching the plateau, the desolation stretched before you as far as you could see and there was no sign that there might be any type of community in the vicinity. The walk across the top of the heap was what I would imagine a moonscape to be, dark barren and dangerous.

Occasionally you would have to jump or clamber across dried up beds of rivulets spontaneously formed during the last wet spell. I personally would not have attempted such a walk if the weather had been wet enough to be still feeding these streams. On the approach to the front edge of the heap, plants began to appear till you reached the crest of the front edge to see Trimdon Grange lying below. Beneath your feet, stretching to the road below, the heap plummeted in a cascade of vegetation, grass at first to be joined by a swathe of ferns then brambles, trees and shrubs at the foot of the slope. Although it wasn’t the hanging gardens of Babylon by any means, the front of the heap did, at least, present a pleasant aspect to the village from this side. To descend you had to go down in two stages, a third of the way then a relatively flat area about twenty yards across followed by the final plunge down to the road along one of several well worn pathways. On the side of the heap nearest the pit an area had been flattened and enclosed to form the stocking ground. This was connected to the pit by an aerial walkway and to the main road below by a winding dirt track emerging near the signal box, which was on the opposite side of the road to the private house just down from the Dovecote.
Of course, the pit heap was out of bounds to us children – which meant, inevitably, that we frequented it far more than we would have done had we been actively encouraged to play there. It was a wilderness in which we could fight our wars, in which we could explore and which we could use as a resource in our chasing and hiding games. But more than this, it was an adventure playground and it was private. It was one of those places – every town and village has them – where adults just did not go, or at least if they did we rarely saw them and

they probably would have preferred that we did not see them as any adult who wanted to be up there was probably up to no good. On the heap we could light fires, shoot air rifles, slide down on the scree on rubber belting discarded from the pit and risk our lives in numerous ways which were just fun then, but which now, with the benefit of hindsight, quite frankly appall me.
I think that the pit heap ceased to be fun to me in my early teens. I remember quite clearly walking past the school which is now The Community Centre on a very wet and grey day. The rain had been torrential and the road at that point had been almost totally covered with water that had run off the heap. Little sandbanks, or perhaps slagbanks would be a more accurate description, were forming on the road due to the action of the water. I remember thinking what if the water was washing down more material than the few inches that was gathering on the road in front of me. How much does it need to wash down before the whole lot comes sliding down after it? At the time it was only a year or two after Aberfan where 144 people including 116 children had been killed when a pit heap had slipped down onto that village and engulfed the local school and I suddenly became worried that it could happen here too. All the years the heap had been standing there and if it ever slipped there was a school directly in its path along with shops and hoses on the main road. Maybe I was just becoming too old to be frolicking about on the pit heap the way I had done as a child, but whatever the reason I would never see it in the same way again. And, in a way, that was just as well. In a few years it would be gone along with the pit buildings, the railway, the signal box, the plantation, the front street, and the majority of the facilities in the recreation ground. Trimdon Grange was changing and so was I. Maybe that’s why I retain such a fondness for the place; you often do for old friends you grow up with.