In 1852 the pit was sold to South Hetton Coal Co., but after 4 years sold to Walter Scott.

In 1881 there were 700 men and boys employed. Pits had names for their seams. Low main seam was 97 fathoms deep, Harvey 452 fathoms and Busty 149 fathoms. Some seams gave better coal than others. In 1863 Lady Londonderry owned the mineral rights. As the pit was failing from 1920 to 1925 it closed leaving 1,000 men and boys unemployed and then the 1926 strike made matters worse. It re-opened in 1937 when a rick 5 1/4 seam was found, but it was closed for good on February 16th 1968. The pit heap was one of the worst as it was almost on the Front Street, and seemed to hover over the Plantation Houses.

At last her long, long life is done,
Her troubles and her trials o’er,
Her head bowed now, her hope is gone,
She can give her best no more,
Her wheels are stilled, her chatter hushed
This mother of a thousand souls,
But still her pride has not been crushed,
In man’s demand for better coals,
A century and a half she’s had,
And watched the village around her change,
Some for the good, some for the bad,
The grand old lady of Trimdon Grange.
Above her proud, majestic head,
She’s watched the seasons come and go,
A shroud of mist, a sunset red,
A blanket white of flurrying snow,
In eighteen eighty two, there came,
Within her bowels, a mighty roar,
She carried on though just the same,
Remembering those who were no more,
Explosions, floods, all took their toll,
Right thro’ her long tempestuous years,
Men paid the price to reap her coal,
But victory was always hers.
Mrs. Brown had lost a son,
Mrs. Jones her husband gone,
Who now will feed her growing brood ?
Clothe, and keep them all in food ?

-At last her long, long life is done,
Her trials and her triumphs o’er,
She hasn’t lost, she hasn’t won,
She is gone and is no more,
Her memories will be bitter sweet,
To all who knew her in her day,
Until at last they fade and fleet,
And like her dust a blown away.
Where once she stood, the fields are green,
With beauty there on either hand,
Once more, a quiet country scene,
Once more a green and pleasant land. 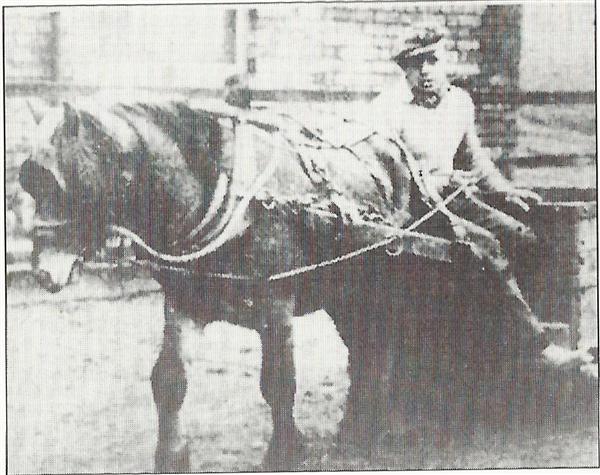 A pit pony and tub

PITMEN
Pitmen worked long hours below ground and for sustenance they would take a tin bottle of cold tea and some sandwiches in a tin bait-can. There was no means of washing hands down there, no rules of hygiene. This prompted a Trimdon Village man, Dennis Rowan to write this song:

“There’s nee nettles down the pit so what’s a chap to do”.

This was set to music by Fishburn comedian Bert Draycott and then recorded by the first Trimdon Folk Group.

Of course smoking was not allowed below or there would have been explo-sions. Pit ponies were kept below ground housed in white washed stables and many friendships were formed between man and pony.
On May 22nd 1919, when Deaf Hill Pit was flooded, water rushed through like a tidal wave. A rescuer, Tom Hampson, found George Grey managing to cling to a roof prop surrounded by water up to his neck. Tom, a deputy overman, told the master shifter, who was a smaller man, to climb on to Tom’s back and so they waded to safety.