and settled in Trimdon for a long while. The Picturedrome was once cleared very quickly when a teenager named Franklyn fell asleep and dreamed of a fire. When he woke up shouting ‘fire’, everybody thought it was for real.

There was also a nearby village attached to Trimdon. There was a pit, finished in the early 1900’s and two rows of dwellings. The village was called Kelloe Winning. A little further along that road was the smallpox hospital. Though there were no patients by the second world war, people were still employed to keep it clean. It later became the site for a piggery. On that same road was Old Wingate Quarry (still in Trimdon), which is now called Wingate Grange Conservation area. This quarry, along with Garmondsway Quarry near Trimdon Village both employed men.

For an older person, a payment of half a crown – 2/6d. could be earned if he had a crake. Whenever a meeting or a sale was to be held he was employed to rattle his crake in the streets which made the residents come to their doors. He would then shout his news and so everyone knew what was going on.
If anyone managed to get employed by the Co-op they were over the moon because they were virtually assured a job for life.

A few girls would perhaps be lucky enough to get a job in a shop or maybe as a servant of one of the better off local families. But as mothers could not afford to keep girls at home unless one was very much needed the girls were obliged to move away. The surrounding towns people were always happy to hire a 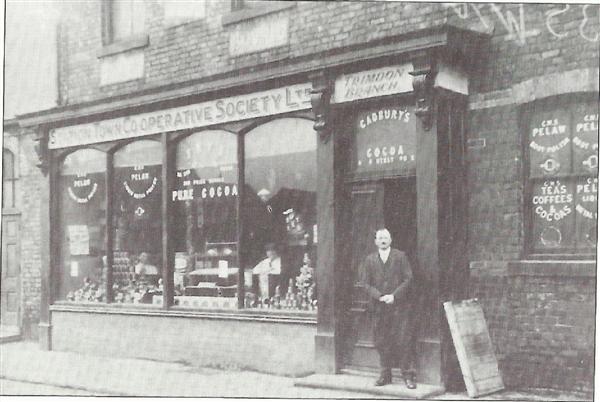 colliery girl, for they were known as good workers. When a girl obtained a situation, her few belongings were packed into a bass bag, a type of straw case, or packed into a brown paper parcel and then they were off to Hartlepool or Ferryhill for connections further away. Some girls were lucky to have a good mistress but some were not and there were no unions in those days. It was known for some employers to count the apples on the trees and to reckon up how many slices of bread could be cut from a loaf. Such people were so mean to think that a girl would steal extra food. The wage would be just a very few shillings per week most of which the girl would have to send home to the family. She would be lucky if she got one half Sunday off in a month. Other girls might be lucky and be with a decent, caring family and be well treated. The good mistress often gave cast off clothes to the girl for her family and extra food when she went home for her time off. In fact some mistresses and servants still kept in touch even after the girl had been married.

Some girls wished to do nursing. Here again there were vast differences. One hospital would not allow a nurse probationer to speak to a wardmaid. A nurse was never allowed to speak to a superior. She would never be allowed her proper time off and even her outside clothes would be criticised by the matron. For three months she received no pay but she would be given this money at the end of her three years in training. Once a month there would be a free half day. Patients had to stay in hospital much longer in those days. A simple appendectomy patient had to stay in bed at least three weeks. Broken limbs had to be set and secured by wooden splints which meant that the patient was often bedfast. It was a great improvement when plaster casts came to be used.

Another hospital would have an entirely different attitude to its nurses. It would be much more friendly and honour the nurses off duty time. Nurses did work other than nursing, although it was part of their training. Wards were swept and dirty linen was cleansed before it was sent to the laundry. The ward kitchen had only a tiny fireplace and all of the breakfast eggs would have to be boiled on it. Breakfasts were served and cleared away but a maid did the washing up. The wage for a first year nurse was ten pounds a year paid monthly; in the second and third years it was £15 and £20 respectively. Uniform was black shoes, black wool stockings, dress with a three inch hem to the ankles, apron hem two inches above the dress, white starched collar to stud onto the dress, starched cuffs and a white cap. No married women were employed. Everyone slept on the premises and had to be in bed by 9.30 p.m. Board was given but it was not of good quality.
There were no unions to fight for workers rights. Nevertheless, even in these hard times, women at home often sang either favourite hymns or popular songs whilst working. Men and boys often whistled tunes as they worked or walked down the street.