JOBS
There was no picking and choosing of jobs when children left school at the age of 12, 13 or 14 when that was the age chosen by law. There were two main prospects — the coal mine for boys and service for girls. Service was literally what it said — to serve and work for others.

It must have been a very frightening experience for a young lad to be taken down the pit in the cage to work long hours in dark tunnels. A few boys might be lucky to be taken on in the shops. If it was the grocery business they had a lot to learn between running messages and delivering goods. As all tea, sugar, butter etc. came loose in crates or casks it all had to be weighed into pounds and packaged. It was quite an art to fold and tuck in a packet and if anything fell out you would have to start all over again. Butter had to be patted into pounds and half pounds whilst sides of ham had to be rolled and tied ready for cutting. Being a grocer was an exacting job but one in which they could take a pride.
Another lesson was the wrapping of goods. These packets were all neatly stacked onto brown paper and very properly wrapped and securely fastened with string. No-one could ever complain of a parcel bursting open. Tinned food was very rare mainly limited to salmon and pineapple. These were rare treats. Cakes and bread were never seen in the shops but in the towns there were often cream horns to be bought but nothing really fancy.
Sometimes a boy might be lucky to get a job in the colliery office as a helper at the station. If a boy wanted to be a butcher or a blacksmith they had to serve a very long apprenticeship. Of course, wages were just a shilling or two. 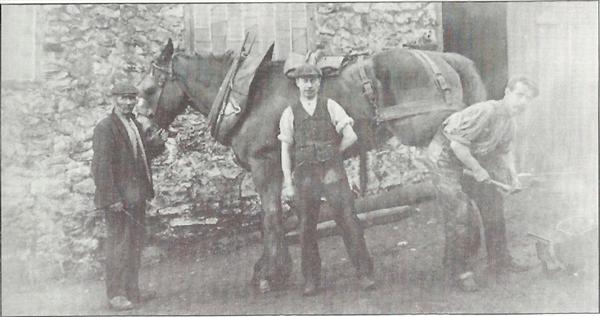