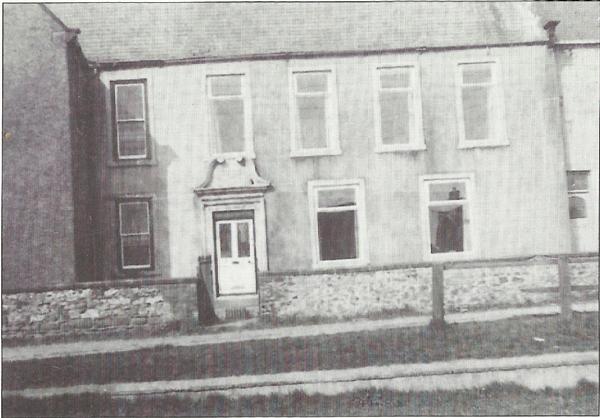 A rigg is a cultivated strip in an open field shared by many people
……..means a word is missed out.
THIS INDENTURE MADE the twelfth day of June in the years of the reign of our Sovereign Lord James by the race of God King of England, Holland France and Ireland the thirteenth and of Scotland the nine and fortieth BETWEEN Humphrey Wharton of Gilling in the County of York gentleman and Thomas Wharton son and heir apparent of the said Humphrey on the one part and Brian Burleyson of Trimdon in the County of Durham yeoman on the other part WITNESSETH that the said Humphrey Wharton and Thomas Wharton for divers good causes and considerations them thereunto moving do by these presents devise grant and …………. let unto the said Bryan Burleyson all that two houses and two cottages in Trimdon aforesaid now in the possession of the said Bryan Burleyson with all houses ……… barns byres curtilage garths stackgarths (cow ?) yards gardens tofts crofts waterways easements passages profit and emolument whatever belonging to them. And also all that twenty acres of pasture ground be it mown or left lying and being in the East Field called the Coal pasture belonging to the cottagers of Trimdon. And also all those two riggs of which said riggs the one of them lying in the south croft of Trimdon aforesaid and the other rigg lieth in the north croft of Trimdon at the east end of Trimdon aforesaid and also all said acres of land lying and adjoining upon the west (nook?) of the said Brian
Page 8

Burleysons garths in Trimdon called the (Wandases?) And also one parcel of ground adjoining upon the north end of the said five acres of land which parcel of ground aforesaid is a part or parcel of all the (Rye?) green with all and singular ways water passages easements profits and commodities whatsoever to the said land ground and premises belonging to or in any wise appertaining. All which said (premises?) are now in the tenure and occupation of the said Brian Burleyson or his assigns. Together also with full and free liberty for the said Brian Burleyson his executors administrators and assigns to water their beasts and bring them away presently from Martinmas until the first of May when and so often as need shall require at a certain place called (Dald…..?) and free egress and regress to and from the said watering place for a footway to the said watering place. And also way leave and liberty to fetch their water for their own use at the west well and little well lying on the north side of D……… the aforesaid so often as need shall require which said houses land ground and premises amongst other things the said Humphrey Wharton and Thomas Wharton have by grant and purchase to them and the heirs of the said Humphrey from the Right Honourable Phillip Lord Wharton and in Thomas Wharton heir apparent of the said Lord Wharton by deed of feofment indented the fourth day of December in the twelfth year of the reign of our sovereign Lord the King’s Majesty that now is TO HAVE AND TO HOLD the said cottages ground riggs of land liberties and other the said premises above mentioned to be hereby granted with appurte¬nances unto the said Brian Burleyson his executors administrators and assigns from the feast of the Annunciation of the Blessed Virgin Mary last past before the date of these present unto the full end and term of nine hundred ninety and nine years thenceforth next ensuing fully to be complete and ended. YIELDING AND PAYING therefore unto the said Humphrey Wharton his heirs and assigns during the said term the yearly rent of thirteen shillings of lawful money of England at the feasts of Pentecost and St. Martin the Bishop in winter by even and equal portions or within fourteen days after being lawfully demanded. And doing …….. and service during all the said term to the Court Leet and Court Baron of the manor of Trimdon aforesaid from time to time upon lawful notice and warning to be (given?) in that behalf. And if it happen that the said yearly rent of thirteen shillings or any part thereof or the said…. and service to the said Court Leet and Court Baron or either of them to be behind and not paid at any feast or time at which the same ought to be paid or done that then it shall and may be lawful for the said Humphrey Wharton his heirs and assigns into the said houses cottages or premises hereby demised or any part thereof to enter and distrain and a distress or distresses there found the same to take and drive or carry away and impound or withhold until such time as the said rent with all arrears thereof shall be duly satisfied and paid and until such times as the said Humphrey Wharton his heirs and assigns be sufficiently satisfied of and for his or their reasonable damage by and through not doing of the said and service AND the said Humphrey Wharton and Thomas Wharton the son and either of
Page 9