to him the said Brian Burleyson his heirs and assigns or such other person or persons as he or his heirs shall appoint in fee simple to be charged with the said rent and …. as above is Be it by time or times with proclamation or without proclamation recovery or recoveries with double or single voucher or vouchers deed of feofment to be executed with …. of…deed or deeds enrolment… presented or confirmation with warranty against all as aforesaid or without warranty or by all or any one or more of the same ways or means or otherwise with warranty as foresaid or without warranty as by the said Brian Burleyson his heirs executors administrators or assigns shall be reasonably required at the cost and charges in the law of the said Brian Burleyson his heirs executors adminis¬trators or assigns for always that the said Humphrey Wharton and Thomas his son now and their heirs be not forced to travel for the doing thereof further than the city or county of Durham IN WITNESS thereof the parties aforesaid to these present indentures interchangeably have set to their hands and seals the day and year first above written.
Translated by Pam Fidiam and Valerie Portass.

This INDENTURE made the sixth day of October in ye eleventh year of the reign of our sovereign Lord William the third by the Grace of God of England Scotland France and Ireland King, defender of the faith etc. BETWEEN William Hickson of Little Town in the County of Durham, yeoman, and Alice his wife and John Hickson son and heir apparent of the said William of the one part and John White of Tursdale, miller, in the County afoesaid of the other part WITNESSETH that the said William Hickson and Alice his wife and John their son in consid¬eration of the sum of five shillings of lawful money of England to them in hand paid by the said John White before the sealing and delivery of these presents the receipt whereof they do hereby acknowledge have demised granted and sold and by these presents do demise grant and sell unto the said John White ALL that his message or tenement and all those his several closes or parcels of ground situate and lying within the and territories of Fishburn hereafter mentioned, that is to say three closes of ground, one only called or known by the name of Park Flatts abutting and bounding upon the lands of Bryan Burleyson of Trimdon in the County of Durham, Gent., on the north And on the lands of Anthony Armstrong of Hart in the said County on the east west and south. And the other close commonly called the Newfall abutting and bounding on a close belonging to Gilbert Trotter called the Fall on the east and north and on the land belong¬ing to the said Anthony Armstrong on the east and west and all that the barn or byre thereunto belonging together with all and singular houses edifices build¬ings barn byres stables orchards gardens battsides lands arable and not arable meadows feedings pastures common and common of pasture moorland heath woods underwoods trees and the soil and ground of the said woods underwoods trees hedges hedge roots mines and quarries of all sorts ways water watercourses paths passages profits commodities easements advantages emoluments 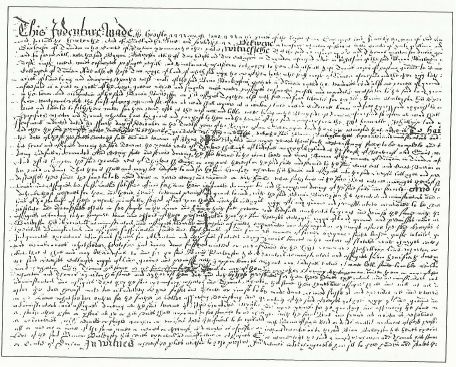