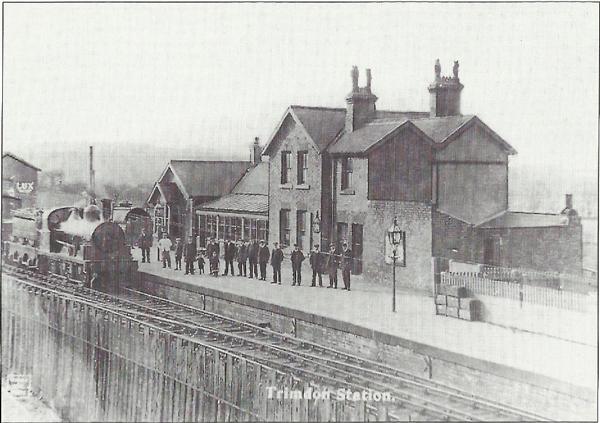 With the growth of the railways, a passenger station was built behind Galbraith Terrace, but the station was later moved to the Trimdon Colliery area, so this area became known at Trimdon Station, yet the station part and the colliery are the same village. The main difference between the two parts is that the Colliery part belongs to Sedgefield Council and the Station part to Easington. Colliery people have soft water and Station folk have hard water.
For further confusion, another pit was sunk in the station area, and was given the name – Deaf Hill pit, so Trimdon Station itself is often referred to as Deaf Hill. No one seems to know how this pit got its name of Deaf Hill, but the near¬est guess is that in days of long ago, if land was very poor, the old farmers would say it was ‘deed’ or ‘dead’ land, which perhaps has grown into the word deaf. The rising land behind the pit is called Sleepy Hill, which does not sound very pro¬ductive.
More pit houses were built for the workers, to add to those that housed Foundry workers. This foundry had been moved to Spennymoor, but this now very modern part is still known as ‘The Foundry.
It is often said the name of Trimdon was given because King Canute on his barefoot walk to St. Cuthbert’s shrine, at Durham, stopped here for a ‘trim and wash down.

THE DAY WE WENT TO TRIMDON

The day we went to Trimdon,
It was wonderful, it was grand,
We heard the pit head buzzers blow,
We heard a big brass band,
We bought some tattie chips,
Oh what a lovely treat,
And ate them with our fingers in the street,
Out of Deaf Hill, thru the Foundry, past
the ancient Coffee Pot,
We found old Trimdon Village, like a
place that times forgot.
We sauntered down the Watchbank, where
a battle said was fought,
On Garmondsway, by King Canute, at least
that’s what is thought,
We came to Trimdon Grange, people sometimes
just say the Grange,
And laughed at all the words that sounded strange,
There were netties, there were crackets, and
some other funny names,
And stotty cakes were made to eat, And not
for playing games.
They say the angels over there, have made
some pearly gates,
To set up in the Trimdons,
so the story tale relates,
And all the names of those who’ve gone
the legendary old
Will have their names emblazoned
all in gold
When the roll is called up yonder
we forever will recall
The day we went to Trimdon
was the greatest day of all.