As the North was not mentioned in The Doomsday Book of 1086, Hugh de Puiset compiled one in 1183. It is often called the Doomsday Book of the north and was the first survey of the north of the Tees – the area that was left out of the Doomsday Book. In the Bolden Book Garmondsway is mentioned as 5 bovates which belonged to Ralph Haget and which the bishop holds by his forfeiture and they yield 16s. 8d. and ten hens with one hundred eggs. And there the bishop has 4 bovates by his own purchase which lie waste.
In the Bolden book Trimdon is listed. The prior and Canons of Guisborough hold Trimdon in free, pure and perpetual alms, exempt from all payments and services for ever.
It is thought that the North was left out of the Doomsday Book because King William did not find Northern folk friendly.

The cholera has been very fatal in a colliery village named Trimdon, situated between the Ferryhill station of the York and Berwick railway and Hartlepool. It broke out very suddenly on Saturday fortnight and since then 14 deaths have taken place. Between 40 and 50 persons have been attacked with the disease in a bad form since its outbreak. Some of the deaths have been awfully sudden and without those premonitory symptoms that have previously marked the early stages of this terrible disease. The principal portion of the village is on a hill, and is rather favourably situated for sanitary arrangements, though there is a burning and sulphurous pit heap not far from that row. The disease has been most fatal among the least prudent, and hence poorer portion of the pitmen, though temperate regular living persons have fallen victim to it also. On Sunday evening week a Primitive Methodist local preacher, a pitman, conducted divine service in the chapel in that place and afterwards took a walk into the fields with his wife. He went to bed apparently in good health, about midnight he was attacked with cholera, in four hours he was dead. There was one death on Monday, and the medical men state the disease is quite epidemic. It is supposed to arise from some local cause not yet discovered, for, though surrounded by other large villages, no cases of cholera have been reported in them. Great complaints have been made with regard to the supposed negligence of the General Board of Health in London. Immediately upon the appearance of the epidemic in the village, Mr. Hood, the viewer and manager at the colliery, wrote to the proper authorities in London, informing them of the circumstances. Down to Saturday night no answer had been received by Mr. Wood. The cases have been attended 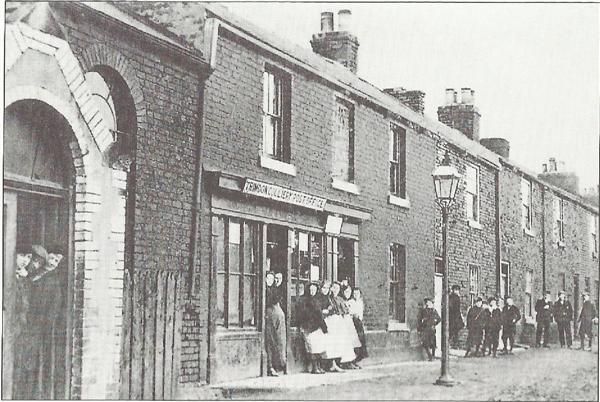 The Square. Next to the Post Office was the Reading Room which hod been the First Primitive Methodist Church.

Land Tax was started as a means of gaining Government Revenue in 1759 and continued until 1830. Trimdon was no exception with two local collectors. The house itself was assessed including the amount of windows it had, the amount of servants it had, also any horses, carriages or carts. In the year 1783 Reverend Donnison of the village vicarage was obliged to pay tax on 29 windows. The least showing payment was 3 windows in 1793 land tax returns. So it may be assumed that anything less must have been free gratis. The Manor house was no exception, having to pay the pricely sum in the year 1760, the amount £4.14.0 in the name of Robert Roper Esq. A mere terrace house must have been as low as 8 pennies as some entries show. Such names as Mary Airey the charity benefactors, Woodifield, Beckworth, all paying large amounts, all having large estates somewhere in the old Trimdon. The total for 1760 to include all lands was £34.14.2.